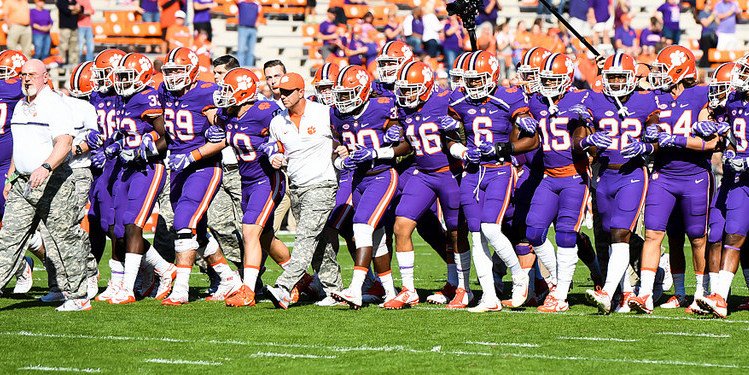 CLEMSON – Chrome helmets. Camo uniforms. A hundred different color combinations. Color Rush. Factory Steel. Matte helmets. Platinum. College football programs have been all over the board in recent seasons with alternative football uniforms that are designed to drive excitement in fans and players.

Most of them, if you’re honest with yourself, are hideous. And they don’t always work – it seems likes teams change their uniforms for a big game, have a blackout or a whiteout or a redout, and lose.

Before any big game, there are those on social media who swear they’ve “heard from someone on the equipment staff that this is the week the Tigers break out” chrome helmets are slick looking uniforms. They want to believe it. But it never happens.

Clemson sticks with the traditional look, and linebacker Kendall Joseph is okay with that.

Joseph, talking to the media Monday in the Poe Indoor Practice Facility, was reminded that Saturday’s home game against FSU is an orange britches game. Under head coach Dabo Swinney, the Tigers save the orange pants for championship games. If Clemson beats FSU, they claim the ACC Atlantic Division title, making Saturday’s contest a championship game, and Joseph is happy that Clemson sticks with the traditional look, saying the need for all the flashy uniforms shows a lack of maturity.

“I think when you first come in from high school, you always envision wearing all of these cool uniforms, so it's something that you're like, 'Dang, I wish we could do this or this,’” Joseph said. “But after you kind of mature and get into the program, you see why he does it because it doesn't matter.”

Swinney says he feels like the thought of different uniform combinations causes an unwanted distraction.

"I really felt like it was a distraction, and I don't want our uniforms to be a distraction,” Swinney told TigerNet. “We have more to worry about than having guys coming in and saying, 'Hey, what are we wearing?' I don't have time for that. Lets' focus on the game."

Joseph agrees with his head coach.

“I feel like teams get caught up into how they look and what they wear,” Joseph said. “Coach Swinney just tries to eliminate as many distractions as he can and uniforms can be one. You appreciate the simplicity of how he does things, the uniforms. It's just like, 'We're not worried about that. Let's just go play football.' You buy into that message.”

There are several programs nationally that have held true to the traditional look, but Clemson and Alabama are the two that stand out. Maybe it’s not a surprise that those teams have played for the last two National Championships and might be headed for a third straight.

“I just want us to focus on the game and getting better as a team. So I kind of eliminated that discussion. But, I felt like we needed to re-create our brand a little bit. So that when people see Clemson, they know what they are looking at. With some of those teams out there, you don’t have a clue who they are when you turn the TV on. You say, ‘Who is that?’ Because you don’t have a clue until you see the name. That is not who we are. That is really all there is to it.”