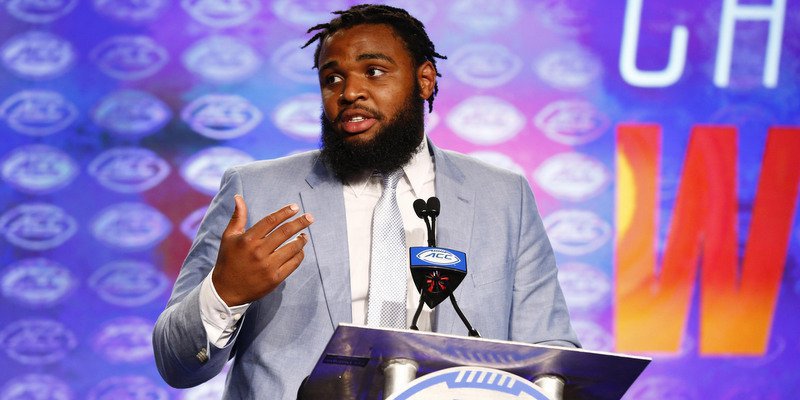 CHARLOTTE, NC – Why not win two?

Clemson shocked many in the world of college football by defeating Alabama in the College Football Playoff National Championship, but defensive tackle Christian Wilkins took center stage at the ACC Football Kickoff in Charlotte Thursday and said that he isn’t satisfied with just one championship.

To be considered great, he wants to win two.

The Tigers begin defense of their championship in the home opener against Kent St. on Sept. 2nd, and Wilkins says it will be his job to convince the younger players that it takes a lot of hard work to make back-to-back College Football Playoff appearances.

Wilkins said the Tigers only have to look at the loss to Pitt and the narrow win over N.C. State to understand that you have to play your best each week in the ACC.

Wilkins doesn’t want his teammates to relax because they’ve won a ring – he wants another one.

“Well, really what I think it is personally and what I'm trying to convey to the rest of the team and just encourage guys what to think or how to think is it was a greater accomplishment to reach one National Championship and win that, but really just why not win two,” Wilkins sad. “We shouldn't get complacent because we won one. There's still more out there for us. If we want to be a good team, want to be good competitors, want to be good athletes, we can never get complacent and be satisfied with whatever we did, no matter how good it is. There's always room to improve, and there's always more out there for us, and we can definitely get better from last year because we weren't perfect even though we did win the National Championship.”

Clemson head coach Dabo Swinney said it’s time for everyone to start talking about the 2017 version of the Tigers.

“Because again, we keep talking about those guys that aren't with us anymore, which that's kind of understandable,” Swinney said. “But we've got a lot of guys that are really hungry to go prove that they can get the job done. We're excited about getting going, and we're going to come in on the 1st. We've got a couple days of program installation type meetings and core values and those type things, and then we'll start practice on the 3rd.”