CLEMSON – There were some pretty good linebackers walking around Clemson’s football practice fields Tuesday afternoon, but some of them are out of eligibility.

The second week of Dabo Swinney’s high school camp got underway Tuesday afternoon (there will also be an evening session), and the first person we ran into was Clemson legend Keith Adams. Adams had a whopping 186 tackles, 35 tackles for loss, and 16 sacks as a sophomore for the Tigers in 1999. He played in the NFL from 2001-2007 and now lives in Canton, Ga.

The reason Adams was on campus? His son, Keith Adams, Jr., is a 2022 running back out of Canton (GA) Cherokee who camped at Georgia last week. Adams said he thinks his son might be close to receiving a Georgia offer.

Another linebacker visitor – and friend of Adams – was former NFL player Jeremiah Trotter. Trotter played for 12 seasons in the league and still lives in Philadelphia (he played for the Eagles three different times) and brought his son Jeremiah Trotter, Jr., to camp. The younger Trotter might work out this evening. He has offers from Baylor, Georgia Tech, Maryland, South Carolina, and Penn St. among others.

*He’s not a linebacker, but former NFL defensive lineman Mike Jones, Sr., watched the defensive players work out. He played at NC State but grew up in Columbia and went to CA Johnson High School. Around Clemson, he’s better known as the dad of linebacker Mike Jones, Jr.

*Clemson 5-star defensive end commit Myles Murphy was an observer for the early session, spending his time watching Lemanksi Hall put the defensive ends through their paces. Murphy spent time with current Tiger KJ Henry. As for Henry – wow. He looks different than he did even in spring practice. He looks thicker and stronger. 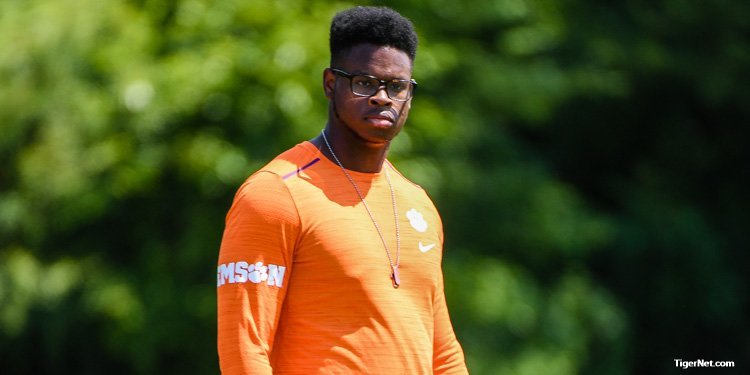 *Current 5-star quarterback commit DJ Uiagalelei and the California prospects showed up, registered and then were whisked off for a sightseeing tour. They might work out in the evening session.

*The top receiver prospect was 2021 4-star Deion Colzie of Athens (GA) Academy. Colzie has offers from Florida, Georgia, Georgia Tech, Notre Dame and Tennessee among others. A 6-4, 190-pounder, he was easily the most impressive receiver we saw. He has soft hands and has a great burst off the line of scrimmage.

*We went over to watch the quarterbacks, and even though Uiagalelei wasn’t working out, there was still plenty of action. MJ Morris, a 2022 prospect out of Carrollton (GA) was impressive. He’s not the biggest quarterback we’ve seen in camp (6-0, 195) but looks like he’s the total package. Georgia has already offered and you bet plenty of other schools will follow suit. He has that IT factor.

*While watching the running backs, I was impressed with Loganville (GA) Grayson product Phil Mafah. Mafah is listed at 6-1, 213 pounds and looks a little bigger than that. He has 28 total offers, including Auburn and Georgia and Florida St. Don’t let the size fool you – he can move. Looks like the prototypical big back but with the speed you love.

We are headed out for the evening session and will have plenty more to talk about then.