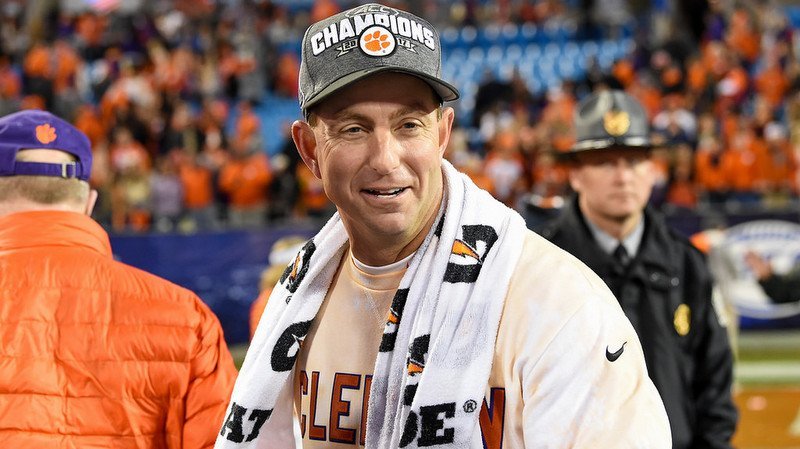 It’s the most wonderful time of the year if you’re a Clemson fan as football’s spring practice kicks into action this week, a ranked basketball team fights for seeding in the ACC Tournament and a ranked baseball team prepares for rivalry week.

It’s that rare time of the year when we have action in all three major men’s sports.

Here is what we have scheduled this week:

Tuesday – baseball is at home against Winthrop Tuesday at 4 p.m. Winthrop is 3-5 on the season, beginning the year by being swept at Ole Miss, losing to USC Upstate and South Carolina and then sweeping Maryland Eastern Shore last weekend.

Wednesday – we meet with Clemson head football coach Dabo Swinney prior to the first practice of the spring, and then the media is invited to watch the first 30 minutes or so of practice. We will have plenty of notes and observations after that, but if that isn’t enough we will further availability with the coaches and players after practice. Just a reminder, because someone always asks, all practices are closed to the public.

At 9 p.m., men’s basketball hosts Florida St. in a key ACC matchup (more on that in a second).

Friday – More spring practice coverage, and that evening Clemson starts a three-game series against South Carolina in Columbia. The Tigers are 7-0 and the Gamecocks are 5-2 (South Carolina hosts Furman Tuesday). The Gamecocks have losses to Charleston Southern and VMI. Clemson is 7-0 and is hitting .286 (with nine homers and 47 RBI) as a team. The Tigers also have a team ERA of 2.39 and have committed just three errors in the first seven games.

South Carolina is hitting .285 as a team with 16 homers and 58 RBI (facing vastly inferior pitching). The Gamecocks have a 2.12 ERA as a team.

Saturday – Game two of the baseball series moves to Greenville as part of the Reedy River Rivalry. Men’s basketball concludes the regular season with a road contest at Syracuse.

Sunday – The finale of the rivalry series is at Clemson.

Ok, back to basketball a for a minute. The Tigers are fighting for a top-four seed in the ACC Tournament, which will be held next week at the Barclays Center in Brooklyn. A three-game losing streak allowed a few other teams to creep into the picture, and Clemson is tied with NC State with a 10-6 conference record. If the season ended today – or the teams ended the season in a tie – the Wolfpack would get the number four seed because of the ACC’s wacky tiebreaker system. Yes, Clemson and NC State split the season series, and both teams split with UNC. The tiebreaker defaults to teams above you in the standings and Clemson lost to Duke while the Pack beat the Blue Devils.

There are three teams a game behind Clemson in the standings – including Virginia Tech, Miami, and Louisville – and Clemson holds the head-to-head tiebreaker of Miami and Louisville. FSU is two games behind the Pack and the Tigers.

For Clemson to get the number four seed, they need to win the final two games and hope NC State slips up against either Georgia Tech or Louisville. Go 1-1 and it isn’t likely the Tigers earn the fourth seed.

We will end up with football. The obvious must-see in Wednesday’s first practice are all of the newcomers, including quarterback Trevor Lawrence, defensive ends Xavier Thomas and KJ Henry, linebacker Mike Jones, Jr., offensive lineman Jackson Carman, and wide receiver Derion Kendrick.

There will be plenty of eyes on the quarterbacks when practice begins. Chase Brice, Hunter Johnson and Kelly Bryant will all compete with Lawrence for spots on the depth chart. But, while many of my colleagues are watching those guys, I want to wander over and get a look at Brent Venables’ new “weapons of mass destruction” as he calls them.

This is going to be a fun and action-packed week.