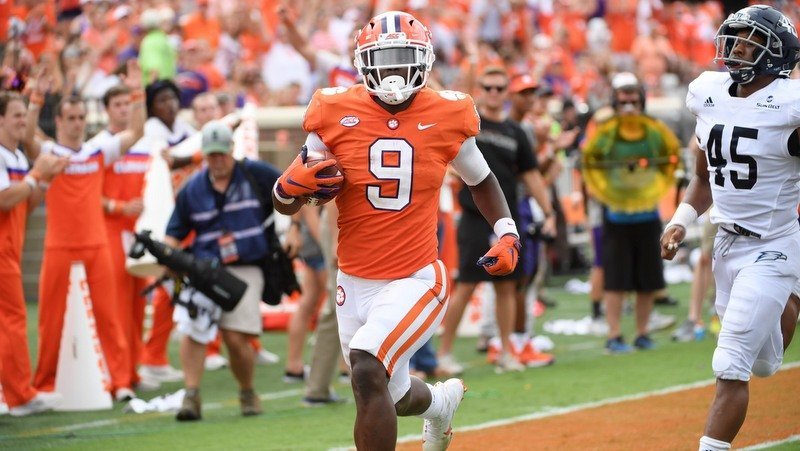 Sophomore running back Travis Etienne set a career-high with 162 yards on 16 carries with two scores, leading No. 2 Clemson to a 38-7 victory Saturday afternoon over Georgia Southern in front of an announced crowd of over 79,000. Etienne’s previous best came last year against Boston College (113).

Clemson won, but more mistakes killed several Tiger drives. The Tigers had three turnovers and two missed field goals led to five drives that came away with no points. Clemson entered the contest turnover free through the first two games.

Trevor Lawrence saw his most extensive action to date and completed 12-of-19 passes for 194 yards and a touchdown. Kelly Bryant completed 7-of-10 passes for 68 yards but didn’t play in the second half.

Justyn Ross had three catches for 103 yards, the first 100-yard receiving game of his career. Clemson outgained Georgia Southern 595-140. The Tigers rushed for 309 yards and passed for 265. Adam Choice added seven carries for 49 yards while Tavien Feaster carried the ball 10 times for 32 yards.

Georgia Southern ran the ball 43 times for 80 yards, a 1.9 yards per carry average.

“Defensively, we played four quarters. I’m proud of our guys on defense," said head coach Dabo Swinney. "They were where they were supposed to be on most every play. They dominated up front. Austin Bryant and Clelin Ferrell both got a couple of sacks. Nyles Pinckney had a big fumble recovery...the sideline would’ve come unglued had he run it all the way back. We’ve now forced a turnover 11 games in a row. Special teams played its worst game. We had two holding calls on punt returns. I love the effort, and guys are fighting. But we’ve got to clean up our technique a little bit. We were just able to overcome some mistakes because of our talent.”

“With the first quarter of the season coming to an end, we couldn’t be any better than 3-0. We’re where we hoped to be, but we’ve still got a lot of improving to do as a football team. I like how we finished today, but I didn’t like how we started. I’m disappointed in the three turnovers. We also had some missed opportunities that we’ve got to take advantage of. There were lots of good things in today’s game, too. We had nearly 600 yards of offense and limited Georgia Southern to 140 yards of offense. We never let the scoreboard dictate our energy.”

Swinney was pleased with the offense.

“There were lots of positives, offensively. Eighteen different guys touched ball for us," Swinney said. "Travis Etienne played well; he had a career-high 162 rushing yards. All of our running backs did good things. We ran the ball like we needed to. After Kelly Bryant went out with a chest bruise, Trevor Lawrence did a lot of good things, too. He made some big throws, but he missed some throws, too, [ones] that he probably wishes he could have back. Also, Justyn Ross showed everyone that he’s a really special player by getting 103 receiving yards. Again, overall, there were lots of positives on offense.”

The Tigers failed to score on their first three drives of the game. Clemson entered the game with no turnovers on the season but turned it over on two of the first three drives. The fourth drive started on the Clemson seven and Lawrence led a 13-play, 93-march that ended with a one-yard plunge by Travis Etienne on fourth-and-goal. The drive took over five minutes off the clock and Clemson led 7-0 midway through the second stanza.

Kelly Bryant started Clemson’s next drive, but landed on the ball on the second play and came out to be checked in by the trainers. In steps Lawrence, who finds Justyn Ross open in the middle of the field. Ross bounced off defenders and ran the last 25 yards or so into the end zone to complete a 57-yard pitch-and-catch that put Clemson ahead 14-0.

The next drive was all Etienne. Etienne started the drive with a 35-yard carry and carried the ball five times for 61 yards, setting up Tavien Feaster’s one-yard scoring run as Clemson led 21-0 with 53 seconds left in the half.

The Tigers extended the lead to 24-0 on Greg Huegel’s 37-yard field goal to open the second half, but a batted ball turned into the first interception of Lawrence’s career and Huegel missed his second field goal as the time in the third quarter began to bleed away.

A blown coverage on a trick play – a wide receiver pass after a lateral – led to Georgia Southern’s first score of the day, a six-yard run by quarterback Shai Werts and it was 24-7 early in the fourth quarter.

The Tigers gave the ball right back to the Eagles after a rare three-and-out, and Georgia Southern drove into Clemson territory. Austin Bryant and Clelin Ferrell ended that drive with back-to-back sacks of Werts, the last one on fourth down, and Clemson took over at the Eagle 46 with just over six minutes to play.

It took Etienne two plays to seal the victory, his second carry a 40-yarder down the left sideline that put Clemson ahead 31-7 with 6:06 to play.

The Tigers forced another Eagle punt, and Adam Choice’s 32-yard run to start the drive ended with his 10-yard scoring rush, and Clemson led 38-7 with 2:03 to play.

Clemson travels to Atlanta to take on its second consecutive option opponent – and third of the season – in Paul Johnson’s Georgia Tech Yellow Jackets. Kickoff is scheduled for 3:30 p.m.

"We’ve gotten some good, quality experience under our belts in this first quarter of season, which bodes well for us entering conference play," Swinney said. "We’re going to Atlanta next week, so we have a huge challenge ahead of us. There have been lots of positive takeaways from the first three games, though. We’ve already got nine plays of 40 or more yards this season. Our next goal is to win the division.”

Clemson vs Georgia Southern Boxscore
Get the latest Clemson gear right here!
Comment on this story