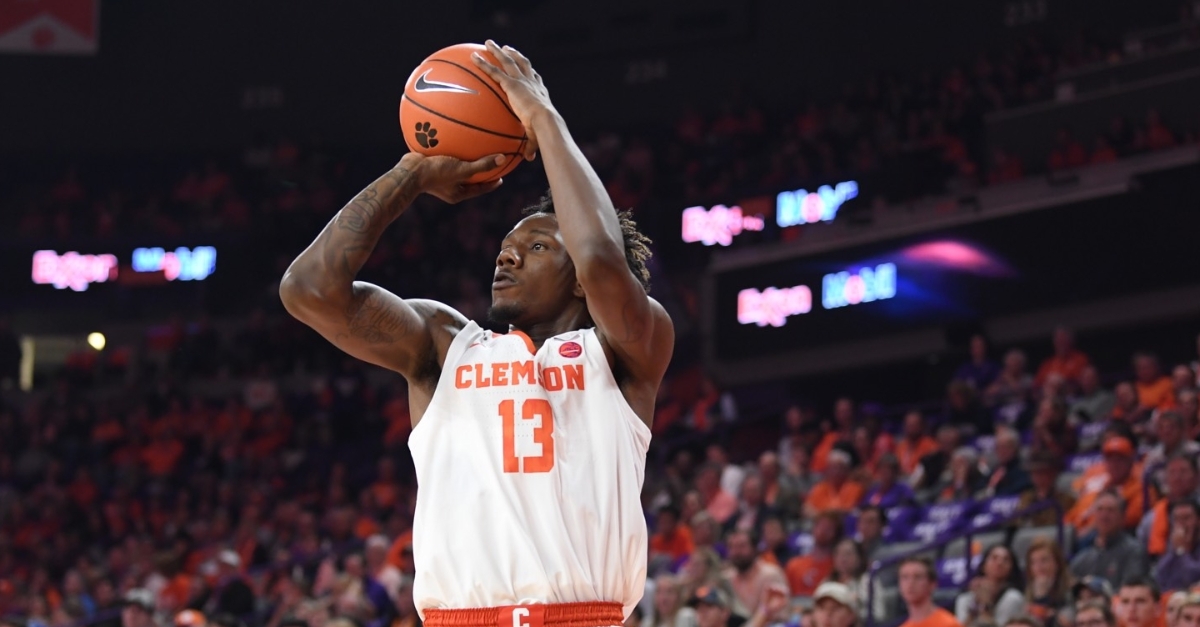 Hunter Tyson scored a career-high 20 points to help Clemson pull away from the University of Detroit Mercy late, giving the Tigers an 87-65 victory over the Titans in Littlejohn Coliseum. Clemson improves improve to 3-1 on the season while Detroit Mercy of the Horizon League falls to 0-2 overall.

Tyson was 5-for-9 from the beyond the arc. Aamir Simms led the Tigers with five rebounds and added 19 points while Tevin Mack chipped in 18 and Khavon Moore had 13.

“I thought we played really well most of the game. It was really in the second half where we started playing better and made our adjustments," Brad Brownell said. “This game really played to [Tyson’s] strengths. He was able to shoot and beat the closeouts. He needs to be out there and continue to defend. He played really well today.”

Brownell said he was happy to see offensive balance.

“We’ll take that. 20, 19 and 18 points by three different players," Brownell said. "That’s a pretty good day for us. This game was a different feel. It was a six-point game for about 10 or 12 possessions in a 70-possession game. We thought they might work short and give the ball to Davis, who had 26 today.”

The Tigers jumped out to a quick lead but each time they threatened to pull away, Detroit Mercy would shoot their way back into it. A Simms dunk halfway through the first half put Clemson ahead 16-9, but the Titans hit back-to-back 3-pointers to pull within one at 16-15.

Hunter Tyson hit a 3-pointer at the six-minute mark that pushed the lead back to seven at 28-21, and Curran Scott’s three from the corner two minutes later pushed the lead to nine at 33-24. Another Tyson 3-pointer and a putback from Tevin Mack with under a minute to play allowed the Tigers to hold a 38-29 lead at intermission.

Clemson came out of the half and quickly pushed the lead to double digits. With just over 12 minutes to play in the game and Clemson leading by nine, Titan head coach Mike Davis (the former Indiana star) was hit with a technical, but the Tigers were unable to take advantage of the extra possession and then went on a streak of turnovers in three straight possessions.

With Clemson lead 56-47, Sims followed his runner in the lane with a putback to put the Tigers ahead 58-47, but the Titans scored five straight points to make it 58-52. Tyson nailed a 3-pointer to push the lead back to nine ay 61-52, and Mack’s steal led to a layup at the other end for a 63-52 lead with just over nine minutes to play.

Dawes hit a free throw that made it 64-52, and Khavon Moore stepped in front of an errant pass on the defensive end and pushed the ball up the floor. His jumper from the elbow bounced off the rim, but Trey Jemison grabbed the rebound and hit the layup for the Tigers’ biggest lead of the game at 66-52 with just over seven minutes to play.

The Tigers led 70-56 a little over a minute later when John Newman hit a 3-pointer from the left key to push the Clemson advantage to 73-56. The Tigers continued to pull away, getting a steal and layup from Moore to make it 79-60 at the three-minute mark. Tyson scored five late points to give the Tigers their final cushion.

Clemson is back in action Thursday night when they host Alabama A&M at 7 pm (ACC Network).