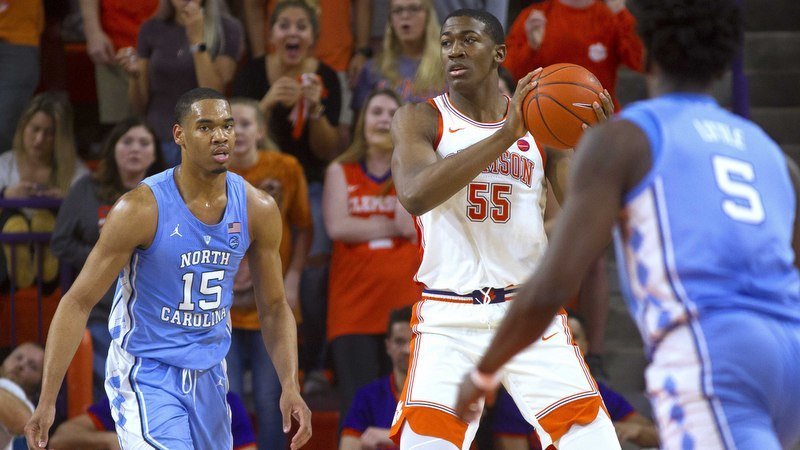 Clemson had its chances in two-point loss to UNC (Photo by Josh Kelly, USAT)

CLEMSON – Close, but not enough.

Shelton Mitchell’s drive into the lane with five seconds remaining was knocked away by two North Carolina defenders and No. 5 UNC held on to defeat Clemson 81-79 Saturday evening at Littlejohn Coliseum.

Clemson trailed 78-75 with 39.3 seconds to play when North Carolina called a timeout. Coby White drove the lane but his shot was wild off the glass, and Trapp grabbed the rebound and was immediately fouled. He hit two free throws and Clemson trailed 78-77 with 18 seconds left to play. The Tigers fouled Kenny Williams with 12.7 seconds to play and he hit both free throws make it 80-77, and the Heels fouled Mitchell at the 10.3 second mark. He hit both of his shots to make it 80-79, and the Tigers fouled UNC again with 9.1 seconds remaining.

Williams hit his first shot and missed the second, but Mitchell’s last-gasp drive into the lane was snuffed out and the Heels held on for the win.

“I thought it was just a great basketball game. Kids on both teams played at a very high level, making big plays,” Brownell said after the game. “I’m really proud of our guys, but North Carolina…they are just very good.”

The Tigers went toe-to-toe with the Tar Heels in the first half but faded down the stretch.

Thomas had four early points, and back-to-back 3-pointers by Trapp and Hunter Tyson gave the Tigers the early 12-8 lead. The teams began to trade 3-pointers Coby White shot the Heels back into contention with four 3-pointers in a span of a few minutes.

Thomas hit a layup with 2:07 to play that put the Tigers ahead 33-29, but another scoring drought and a fast-break 3-pointer from White put UNC ahead 35-33 with 1:06 to play. Thomas was then called for a flagrant foul, and Cameron Johnson hit a 3-pointer to put the Heels ahead 39-33. John Newman gave the Tigers a little momentum heading into intermission, however, hitting a short jumper with five seconds remaining and the Heels lead 39-35 at the break.

The Heels threatened to blow it open early in the second half. Johnson hit a 3-pointer that put UNC ahead 46-37, but the Tigers came roaring back as the Heels went cold. Reed hit two free throws that gave Clemson a 48-47 lead and a few minutes later hit a layup that put the Tigers in front at 54-48 with just over 11 minutes to play. That was part of a 17-2 run that saw North Carolina go over seven minutes without a field goal.

Luke May brought the Heels back, however, scoring six points in just over a minute to put UNC ahead 56-54. Aamir Sims stopped that run with a 3-pointer a few seconds later to give the Tigers a 57-56 advantage, but the Heels continued to get points inside and out and held a 70-64 lead when Trapp was fouled with 3:16 to play.

Trapp hit both free throws to make it 70-66, but white hit two free throws on the other end to push the lead back to six. Reed answered with a layup to make it 72-68, but Johnson hit a 3-pointer as the shot clock expired to make it 75-68 with just over two minutes to play.

Needing a big play, Reed delivered, picking White’s pocket and taking it all the way for a layup that brought Clemson to within five at 75-70 with 1:13 left on the game clock. The Heels held a 78-70 lead when Trapp nailed a 3-pointer from the corner that made it 78-75 with just under a minute to play, and the Heels called a timeout with 39.3 seconds left on the clock.

Clemson takes to the road next Wednesday, traveling to South Bend to take on Notre Dame in a 9 pm tip.

Clemson vs. UNC box
Get the latest Clemson gear right here!
Comment on this story