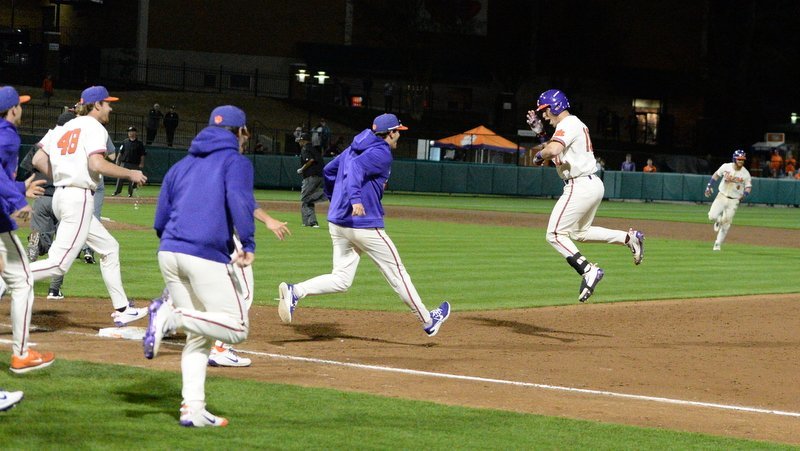 CLEMSON – It’s been a long time since Clemson lost a midweek game, 657 days to be exact, and thanks to some late inning heroics the streak will live to see another day as Kyle Wilkies 10th-inning single lifted No. 7 Clemson to a 9-8 victory over Winthrop Tuesday at Doug Kingsmore Stadium.

Winthrop pounded out 14 hits and scored eight runs, but a Patrick Cromwell home run and small ball executed to perfection gave Clemson a 9-8 win over Winthrop in 10 innings Tuesday night at Doug Kingsmore. Cromwell launched a 375-foot home run over the Cajun Café with one out in the ninth to set up the extra-inning heroics.

Drew Wharton earned a four-pitch walk to start the 10th inning. Grayson Byrd stepped to the plate and immediately showed bunt but pulled it back, perfectly executing a slash through the left side to put runners on the corners. With one out, Wilkie singled up the middle to score Wharton from third, giving Clemson the win and setting off a celebration just past second base.

Redshirt freshman Mat Clark got the final two outs of the 10th inning on just six pitches – all breaking balls – to pick up the first win of his young career.

Clemson improves to 8-0 on the season while Winthrop falls to 3-6.

"It's always fun to hit a walk-off. That's my first one here," Wilkie said after the game. "Everybody goes in a slump so I had to just keep telling myself that I have to keep working. Guys are telling me to keep hitting and it will all work out."

Cromwell said he knew his ninth-inning shot was a homer as soon as it came off the bat.

"Seth had gotten out before and swung at the first pitch so I needed to see one because I didn't want a 1-2-3 inning on three pitches," Cromwell said. "I was taking until I got a strike. I got the strike and the 2-1 pitch, he just left it over the middle of the plate. I put a good swing on it and tied the ballgame up. I don't hit many that are no-doubters. They're usually first-row, but I had a pretty good feeling that one was out as soon as I hit it."

Head coach Monte Lee chalked it up to another crazy game at DKS.

"Well, another crazy game here at Doug Kingsmore. Come from behind fashion and extra inning ballgame," Lee said. "I can't say enough about our bullpen. I know our first couple of guys got hit a little bit but if you look at what Ryan Miller, Ryne Huggins, Carson Spiers and Mat Clark did out of the pen - six innings and only gave up one run. Gotta give those four guys a lot of credit for keeping us in the ballgame and giving our offense a chance.

"It wasn't our best game. Defensively, we had some miscues, but we need to be in these kinds of games. We told our guys when we were down by a few a runs, 'This is what it's like here. It's gonna happen, so you better get used to it and better get used to being behind here and there and finding a way to fight your way out of it.' Our guys just seemed to believe even when we're down by runs that we're going to find a way to get it done. I've got to give my team a lot of credit tonight for finding a way to get it done."

It didn’t take the Tigers long to jump on the scoreboard. Logan Davidson walked to lead off the bottom of the first and moved to second on Patrick Cromwell’s one-out walk. The hot-hitting Williams stepped to the plate and hammered a 2-1 fastball 414 feet into the seats in left field for a 3-0 lead. It was Williams’ third homer of the season. Two batters later, he Tigers added another run when Drew Wharton hit a 381-foot bomb into the seats in left for a 4-0 lead.

Starter Sam Weatherly escaped trouble in the top of the first thanks to a baserunning blunder by the Eagles but allowed a single run in the second. It all fell apart for Weatherly and the Tigers in the third. A walk and a single started the inning, and Seth Beer dropped a fly ball in right, loading the bases. Weatherly was replaced by Travis Marr, and a wild pitch scored a run and four straight singles scored three more runs as the Eagles to a 5-4 lead.

Weatherly pitched 2 1/3 innings, giving up five hits, four runs (three were earned) while walking two and striking out one.

Winthrop chased a struggling Marr in the fourth. A double, a wild pitch and a single ended the day for Marr with the Eagles holding a 6-4 lead. He was replaced by Ryan Miller, who allowed a single and got out of the inning by just allowed a groundout that scored the seventh run for a 7-4 lead. The Eagles had 12 hits after their first four turns at bat.

Clemson went without a hit for four innings but put together a big inning in the sixth. Williams started the rally with a single to deep short and he moved to second on Jolly’s groundout. Wharton doubled to left to score Williams and make it 8-5. Grayson Byrd singled up the middle to score Wharton and make it 8-6, then promptly stole second. With two out, Kyle Wilkie stroked an RBI single to right-center and Winthrop led 8-7 at the end of the sixth.

The Eagles held that one-run lead heading into the bottom of the ninth. Beer led off the inning with a high fly to short center, but Cromwell picked a good time to launch his first homer of the season. Ahead in the count, Cromwell turned on a pitch and smacked it over the Cajun Café to tie the score at 8-8 and send the game to extra innings.

Clemson’s bullpen did yeoman work. Ryan Miller pitched four innings and gave up just one run, Ryne Huggins pitched 2/3 of an inning and Carson Spiers tossed 1 2/3 scoreless innings. Mat Clark came on in the top of the 10th and recorded the last two outs.

Clemson travels to Columbia to take on South Carolina Friday night at 7 p.m.

Clemson vs Winthrop boxscore
Get the latest Clemson gear right here!
Comment on this story