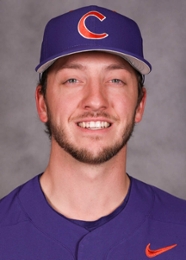 
2017: Redshirted as a member of the developmental squad … No. 110 freshman in the ACC in the preseason by Perfect Game.


• Favorite hobbies – Golfing and kayaking
• One fact that most people don’t know – Can play the ukulele
• Favorite food or candy – Steak and a sweet potato
• Proudest childhood accomplishment – His Little League did not lose a game for three straight seasons
• Ideal vacation spot – Fiji
• Childhood hero – His father, who taught him how to play baseball
• One person, living or dead, to eat dinner with – Sandy Koufax