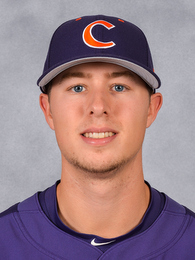 Outfielder
B I O
Outfielder and first-baseman who is one of Clemson’s top contributors off the bench ... a career .224 hitter with a .310 on-base percentage in 49 games (11 starts) over two seasons ... has two doubles, 14 RBIs, four runs, nine walks and one steal.

Before Clemson: Played in the East Coast Pro Showcase ... Team Elite Prime member ... played in the Perfect Game National Showcase ... first-team All-Southeast by Perfect Game ... first-team all-county as a senior ... all-state at the AAAAAA level ... No. 343 player and No. 73 outfielder in the nation and No. 28 player and No. 10 outfielder in Georgia by Perfect Game ... lettered three times in baseball at Peachtree Ridge High School, where he was coached by Ryan Hanik.