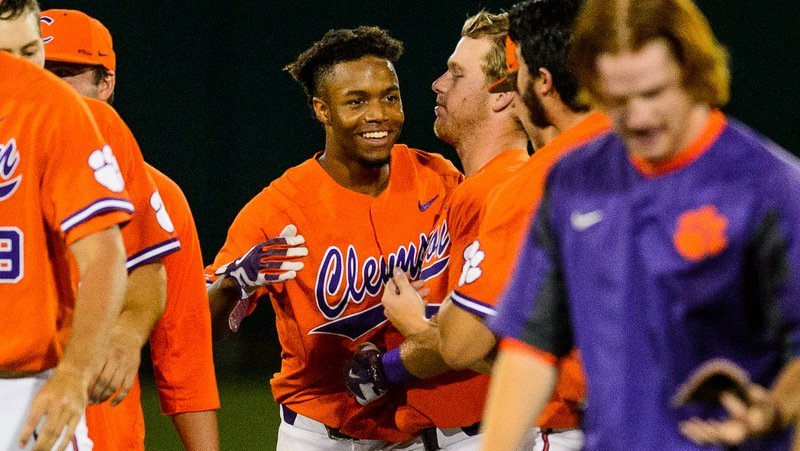 Jordan Greene’s one-out RBI single to left in the bottom of the 10th propelled Clemson to a 4-3 victory over Morehead St. in the second game of the NCAA Clemson Regional at Doug Kingsmore Saturday night.

Drew Wharton led off the bottom of the 10th with a flare single to right that fell in no-man’s land. Patrick Cromwell laid a bunt down the third base line to move Wharton to second with one out. That brought up Greene, who celebrated his second walk-off hit of the season with his teammates.

Clemson’s bullpen was stellar, pitching 4 2/3 scoreless innings. Ryley Gilliam pitched 2/3 of an inning in picking up the win.

Morehead St. falls to 37-25 with the loss, while Clemson improves to 46-14 with the victory. Clemson is 15-5 in one-run games this season, a school-record for one-run wins in a season.

Morehead St. will take on St. John’s in a loser’s bracket game Saturday at 1 p.m. The loser of that game is eliminated, while the winner waits to take on the loser of Clemson’s 7 p.m. game against Vanderbilt.

"I don't know if we could have had a better test in game one of the postseason," head coach Monte Lee said. "We talked to our guys about this being a new season, that we were 0-0 coming into this weekend and I don't know if we could have been tested any more than we were tonight. Morehead St. - what a great ballclub. I thought their starting pitcher battled all night long. They gave us all that we could handle. But our guys stayed poised, stayed confident and nobody was frustrated. Our bullpen was phenomenal and we had to use them. Just a great baseball game and I don't know if I've ever been in a more stressful baseball game in my life."

Greene said he took a deep breath before his at-bat. 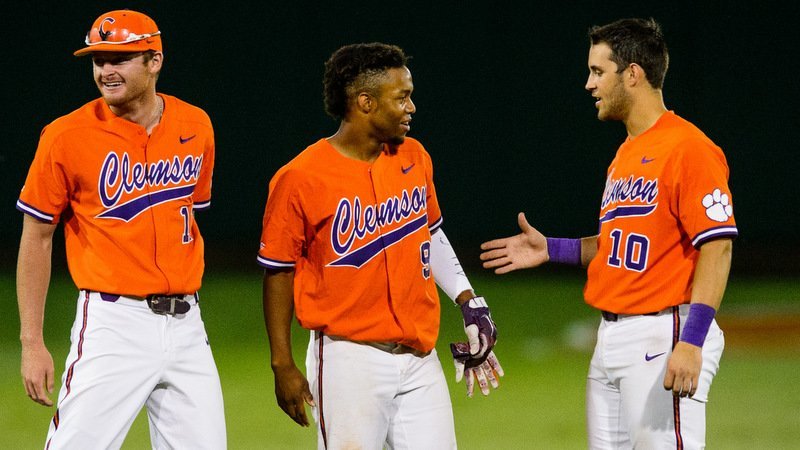 "I was just worried about the pitches I was going to see," Greene said. "I knew I was going to get a slider. I knew what I was gonna get so I made sure I stayed on it just enough to get it through the hole. Coach Buck (Greg Starbuck) told me the pitcher threw a lot of sliders and I felt like I had a good approach at the plate. It just worked out for me. I am still stunned."

The Eagles took advantage of two base hits and two Clemson errors to score two runs in the second. Meanwhile, the Tigers were getting runners on base but couldn’t get the big hit, leaving six runners on base through the first three innings.

The Tigers finally managed to break through in the bottom of the fifth. Beer timed up a 78-MPH changeup and drove it deep over the wall in right to make it 2-1. The homer was the 21st of the season for Beer. It was also Beer’s 55th career homer and remains 4th all-time at Clemson behind Jeff Baker and Andy D'Alessio (both with 59) and Michael Johnson (58). Beer is the nation's active leader in career homers.

The Eagles chased Clemson starter Brooks Crawford in the ffith. Crawford allowed a leadoff triple and intentionally walked a batter with one out to set up the double play. He was replaced by lefty Mat Clark, who induced a grounder to second. The ball was hit too slow to turn a double and the run scored to make it 3-1. Clark was replaced by Carson Spiers, who got out of the inning without further damage.

Crawford pitched 5 1/3 innings, giving up just three runs on three hits. Only one of the runs was earned. Crawford walked two and struck out two in his 75 pitches.

Clemson chased Eagle starter Dalton Stambaugh in the bottom of the sixth. Drew Wharton walked to lead off the inning and advanced to second on Jordan Greene’s one-out single. Justin Hawkins followed that with a double down the left field line that scored Wharton to make it 3-2, putting runners in scoring position with one out. Stambaugh was lifted at that point – having thrown 116 pitches – and Grayson Byrd struck out as a pinch-hitter (for Sam Hall) for the second out.

Logan Davidson walked to load the bases and Kyle Wilkie laced a shot up the middle that was gloved in the air by the shortstop, but he dropped the ball as he hit the ground. That allowed Greene to score, but with Beer on deck third-base coach Greg Starbuck waved Hawkins home, even though the ball was in the infield. Hawkins was thrown out easily at the plate, and the score was tied at 3-3 after six.

Lee said Vanderbilt will be a tough matchup.

"They have a tough lineup. If you look at them, they look good in that uniform," Lee said. "You just look across the field and they have some good-looking kids. They are a good defensive ballclub and they recruit power arms that throw hard. They are going to pitch off their fastball, which will be a big adjustment for us. They are going to challenge us a bit more. Tim's (Corbin) teams don't beat theselves. But we won't be tested anymore than we were tonight. Going through what we went through tonight will help us tomorrow."

Clemson vs. Morehead St. box
Get the latest Clemson gear right here!
Comment on this story