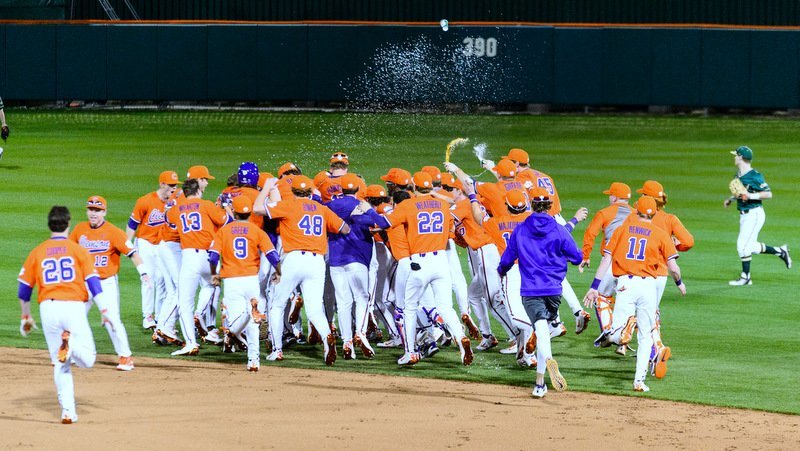 Clemson trailed 4-1 with two outs in the bottom of the ninth but rallied to tie the score, setting up the heroics in extra innings.

Bryce Tedosio led off the tenth with a ringing double to left and moved to third on Logan Davidson’s grounder to second. That brought up Drew Wharton as the Tribe moved the infield in to cut off the run at the plate. Wharton didn’t get a chance to hit, however, getting hit by a pitch on a 3-1 count to put runners at the corners with one out.

Seth Beer stepped to the plate and the Tribe elected to walk Beer to load the bases, setting the stage for Williams. Williams laced a sharp single to left to score Teodosio with the winning run.

The opening day win broke a four-game losing streak for the Tigers. The last time Clemson won a season opener was Feb. 15, 2013, when the Tigers defeated William & Mary 2-0 at Doug Kingsmore Stadium.

Williams had two of Clemson’s eight hits and Robert Jolly drove in two runs in the ninth.

"I'd like to thank our fans. Opening Day at 4 o'clock on a Friday, it's awfully tough to get off work and make arrangements to get here," head coach Monte Lee said. "It just shows the dedication and the love that they have for our program and for Clemson University to have 6,000-plus people here on Opening Day for a 4 o'clock game. It says a lot. We greatly appreciate our fans coming out and supporting our guys. 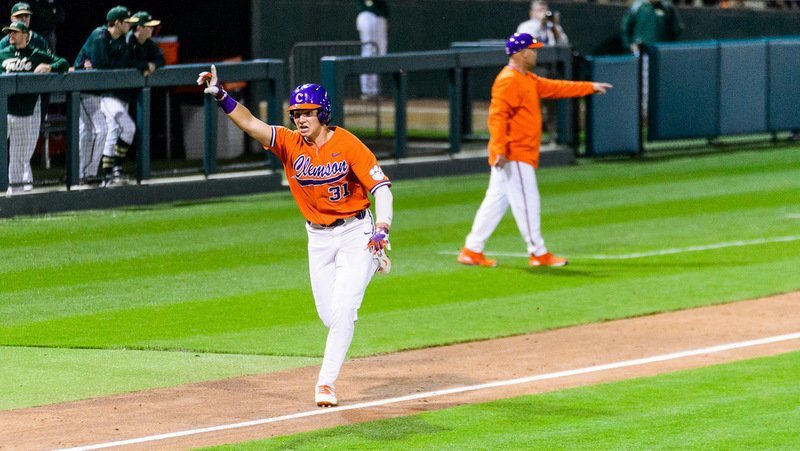 "We certainly needed their support because for about eight innings we couldn't hit water if we fell out of a boat, but we found a way in the ninth and the 10th innings with some great at-bats to find a way to get this thing done. Got to give a lot of credit to our bullpen today and our pitching staff. We did not walk a batter. We did not have a walk. Our defense was outstanding. We were error free. We did not give up a free 90 in the whole ballgame. Got to give our pitching our defense a lot of credit. Our bullpen was unbelievable."

Scoring threats were hard to come by in the early innings. Seth Beer had a two-out double in the first and it took the Tribe until the fourth to get a runner into scoring position. Two one-out singles and a passed ball put runners at second and third with one out, but Hennessy got a strikeout and a bouncer to short to end the inning.

Hennessy ran into trouble in the fifth. The Tribe’s Owen Socher singled to open the frame and moved to third on Zach Pearson’s double off the wall in left. That brought up leadoff hitter Ryan Hall, who unloaded a three-run homer deep into the Chapman Grandstand in left for a 3-0 lead.

Hennessy struck out the next hitter, but his day was done after 60 pitches and 4 2/3 innings. He gave up three runs, all earned, struck out six and walked none. He gave up six hits and was replaced by Ryan Miller.

The Tigers finally got on the board in the sixth. Bryce Teodosio laced a single to left for his first career hit, and he moved to third on Logan Davidson’s single to left. Davidson was caught stealing for the first out, and Drew Wharton hit a rocket to left that was caught at the wall. It was deep enough to score Teodosio for the first run of the season, and the Tribe led 3-1 at the end of six innings.

Miller ran into trouble in the seventh, giving up a single and a double to left for a 4-1 lead.

Clemson rallied to tie the score in the ninth.

Beer was hit by a pitch with two outs to start the rally, and he advanced to third on a double to left by Chris Williams. Both runners scored on a single over the third baseman's head by Robert Jolly to make it a 4-3 ballgame. Sam Hall came in to pinch run for Jolly, and back-to-back walks loaded the bases with two outs.

That brought up Patrick Cromwell, who faced new reliever Wade Strain. Strain got ahead of Cromwell 0-2, but a wild pitch on a 2-2 count allowed Hall to score the tying run. Cromwell struck out to end the inning.

Lee said his team never gave up or in.

"Then you look at the ninth inning. We talk about toughness and competitiveness in our program," Lee said. "Two outs and we're down 4-1. Beer gets hit by a pitch. Williams doubles. Jolly does what Jolly does. Put Sam Hall in to run for him and my heart fell down to my stomach when he was running, but we had to run right there to try to score on a single to tie the ballgame so it was a gutsy call. Gotta give Coach Starbuck credit on the call. The next thing you know, it was competitive at-bats in the 10th.

"Just proud of our guys. I know that we've struggled a little bit on Opening Day around here for the last few years, but our guys never wavered. We remained calm in the dugout even when we down by a few runs. Our guys continued to compete and pull for each other and put together some really good at-bats there at the end along with some great pitching and defense and found a way to get the win here in game one."

Ryley Gilliam came on to pitch the tenth and allowed one baserunner.

Sheehan was good enough for the Tribe, pitching seven strong innings and giving up just three hits and the one run. He walked one and struck out four. Miller pitched three innings in relief for the Tigers, allowing the one run.

The second game of the series is Saturday Saturday - RHP Jamie Sara (W&M) takes on RHP Brooks Crawford. The game is scheduled for 2 p.m.

Clemson vs. William & Mary game one box
Get the latest Clemson gear right here!
Comment on this story