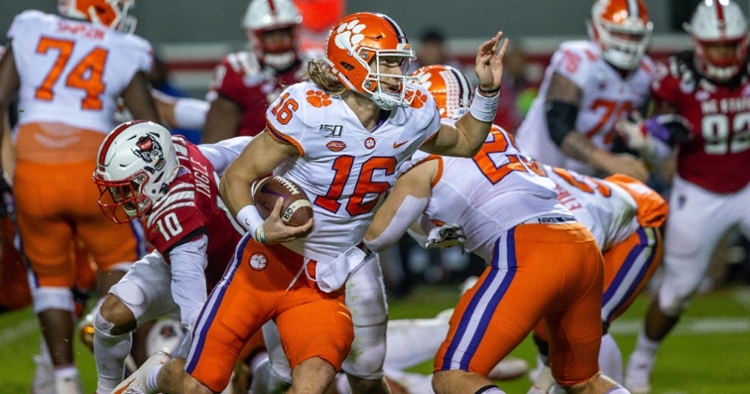 CLEMSON - When Trevor Lawrence walked over to the sideline after throwing his second interception in the first quarter against Louisville a month ago, Clemson head coach Dabo Swinney asked him what he was looking at.

When Lawrence told him what he saw, Swinney said, “That was stupid.”

Since then that moment, the last play for the Tigers in the first quarter of an eventual blowout win, Lawrence has been on fire.

Lawrence completed just 3-of-7 passes for 9 yards in the first 15 minutes of the Louisville win.

Since that game – and that dreadful first quarter – Lawrence has been using his pre-snap checklist to his advantage. Since that first quarter he has completed 65-of-84 passes (77 percent) for 995 yards and 12 touchdowns. And not one turnover.

“I think it's just being a little more focused. I was preparing well for the other games, too,” Lawrence said Monday. “But I think there has been a little extra level of focus the last few weeks that has been the difference for me. Before every snap, it's going through everything I need to do and going through my checklist. My pre-snap checklist has been big for me. That and the extra focus has been big for me.”

In the three games since the win over Louisville, the Clemson offense has been scoring points and gaining yards at a historic rate.

Lawrence became the first Clemson quarterback to throw three touchdown passes in five consecutive games and has now thrown a touchdown pass in 20 consecutive games, adding to the longest active streak in the country. (Note: UCF's McKenzie Milton had a 24-game streak prior to suffering an injury in November 2018 that will likely preclude him from playing in 2019).

Lawrence thinks this year’s offense is playing as well as it heading into the championship phase of the 2018 season.

“I think so. It's definitely similar to last year, how we just got better every week,” he said, “We are in the same spot, but I think we are a little bit better because of the continuity. The guys have been playing together for longer. Last year, at this point, was my first season, so I have a whole season under my belt. The receivers, too. They are in the same place. I think it's in the same place except for experience. We are just getting better every week.