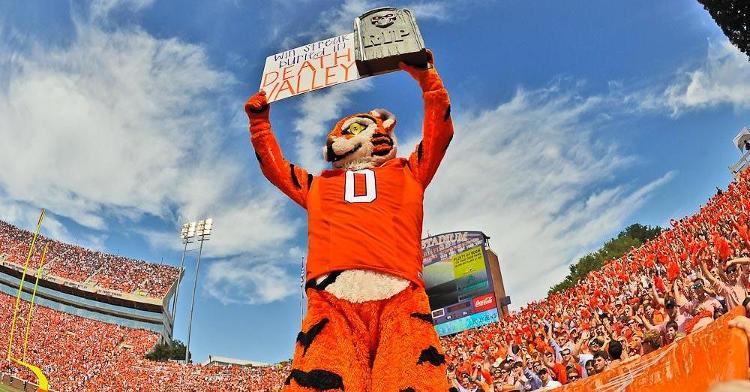 There have been plenty of memorable games in the Dabo Swinney era at Clemson - especially in the last four seasons, but why does the third game of the 2011 campaign - and a two-touchdown one at that - make the top-10 cut?

Clemson downed the reigning national champs and ended a 17-game winning streak for Auburn - and the victory's importance echoed through the vocal cords of Swinney postgame with Skycam the only view available in the crowd of jubilant Clemson fans:

"It's what I told you before the game - our team believes," Swinney told ESPN's Quint Kessenich. "Our team believes and they've got heart. We got greatness in us. So I told them that you've got greatness in you but you've got to make a decision to be great. They made a decision to be great today - and I can't think of a better place to end this streak than Death Valley, South Carolina, baby!"

The standout performance came on the heels of a less-than-stellar game versus Wofford (a 35-27 win) after the seven-loss 2010 season - and was the first in a tough three-game stretch that also included the reigning ACC division winners back-to-back in Florida State at home (a 35-30 win) and Virginia Tech on the road (a 23-3 win).

The win signaled the beginning of something special in a year that Swinney's Tigers would capture their first ACC title in 20 years. (Brandon Rink)

There really isn’t one stat from this game that stands out, and that’s because Clemson’s offense came out humming. The Tigers rolled up 624 yards of total offense, including 386 through the air and 238 yards on the ground. Tajh Boyd was 30-42 for 386 yards and four scores while receiver Sammy Watkins caught 10 passes for 155 yards and two touchdowns.

Clemson was 14-of-18 on third down and ran 92 total plays. Running back DJ Howard had nine carries for 86 yards.

Another interesting stat from that game – Clemson had lost 14 straight to Auburn dating back to a 34-0 win all the way back in 1951. (David Hood)

How about two? Boyd was magnificent in just his third start, completing 30-42 passes for those 386 yards. But he also ran the ball seven times for 30 tough yards in what would become a hallmark of Boyd’s career – picking up the tough yards on short-yardage downs.

Watkins was also magnificent, catching those 10 passes for 155 yards. But people forget that Sammy also had seven carries for 40 yards, including a 25-yarder.

Auburn took a 14-0 lead in the contest but was outscored 38-10 the rest of the way. Boyd and Watkins were a huge part of that, hitting on 10-straight third down conversions at one point. A new era under offensive coordinator Chad Morris was born. (Nikki Hood)