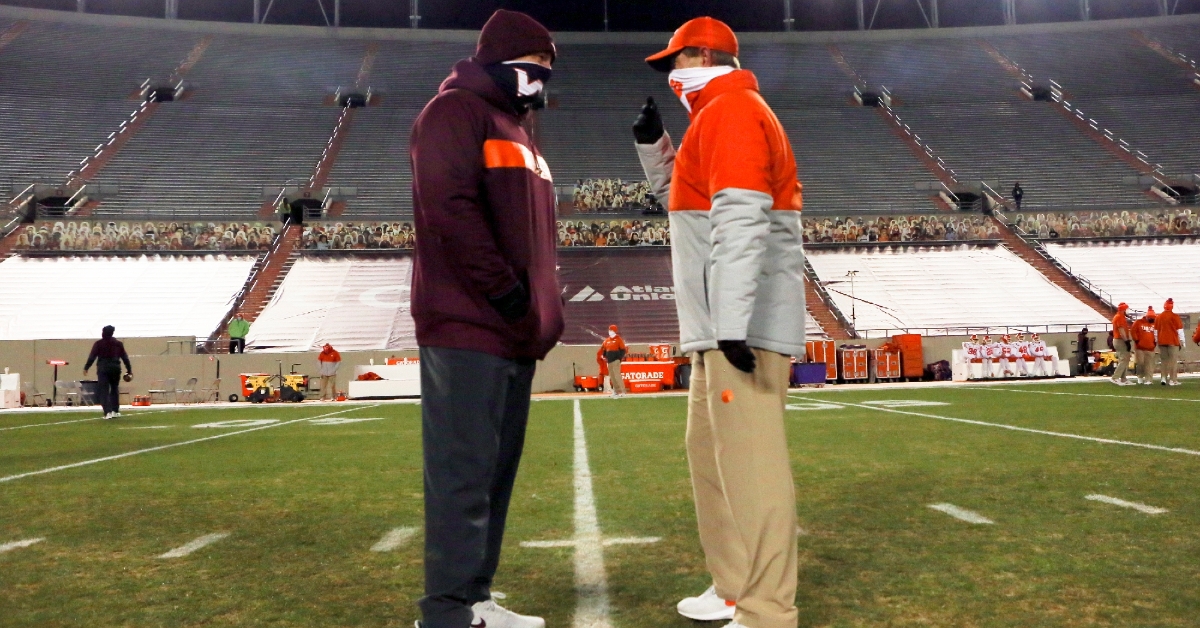 It always goes by so fast.

After an offseason where Clemson players fought for their opportunity to play, we watched them complete a 9-1 regular season with no serious COVID-19 health complications from practicing and playing football. The staff and University as a whole deserve a lot of kudos. Not only that, but Clemson accomplished their on-the-field goals by winning the opener and earning a berth to the ACC Championship.

The game in Blacksburg was much different than last week’s contest against Pittsburgh. Last week, a beautiful day in Death Valley saw Clemson and Pittsburgh sling it around in a high-possession game that was out of reach before the end of a 31-0 first quarter. In cold Blacksburg, Virginia Tech played extremely conservatively, milking the clock and limiting possessions. They dominated the time of possession (38 minutes to Clemson’s 22) despite only scoring one touchdown. As different as the games were, both ended in 35-point Clemson wins. With that, the Tigers have an open date before the biggest game ACC Championship game the conference has ever had.

So what did we learn this week? Let’s dive in!

I’ve spilled a lot of (digital) ink fretting over Clemson’s running game. Now we’re seeing it make progress. Clemson used a lot of zone-read where QB Trevor Lawrence watches the defensive end and gauges if he is going after the running back or him before deciding if he will hand it off or run it himself. Tony Elliott says this “makes people honest so even if they load the box they don’t have enough hats… When we have the ability to run at QB it opens a lot of things up.”

Clemson also had several plays with two tight ends and only two wide receivers (12 personnel) to give the running game some extra punch.

Travis Etienne ran for 66 yards on 16 carries (4.1 YPC), but in the process opened up opportunities for Lawrence to rush for 41 yards on just 7 carries (5.9 YPC). Clemson reserve running backs gashed the Hokies. Dixon, Mellusi, and Rencher averaged 12.3, 14.7, and 50 yards per carry, respectively.

Virginia Tech’s rushing defense is well below average, but it is encouraging nonetheless. Notre Dame is third in the ACC in yards per carry allowed at just 3.3 (Pittsburgh and Clemson rank 1st and 2nd). Clemson averaged just 1 YPC in their first matchup. We’ll see if Clemson is significantly more successful in the rematch with Trevor Lawrence back and the schematic tweaks.

Trevor was excellent in the running game but wasn’t as sharp as usual passing. On one play, TE Braden Galloway was wide open, but Lawrence hesitated and threw it after the window had closed. VT dropped a potential interception. Later, while scrambling to the right he threw it to a receiver that was out of bounds. The ball hit the defender. Fortunately, he wasn’t expecting it and didn’t catch it. Lawrence also threw an interception in the end zone where he didn’t see safety Divine Deablo creep over. His 195-yard performance was his lowest since the Citadel game where he only had 9 pass attempts.

Despite a less than stellar game, there’s little to worry about at QB. Lawrence has 2,431 passing yards, 20 passing TDs, and only 3 INTs on the season. He likely won’t win the Heisman (UF QB Kyle Trask likely sealed that up with a 4 TD performance that pushed his stat line to 3,243 passing yards, 38 TDs, and 3 INTs), but he is primed to be the No. 1 pick of the NFL draft and perhaps a two-time National Champion.

Only three Clemson receivers registered a catch: Cornell Powell, Amari Rodgers, and Brannon Spector. The lower than usual number of possessions, harsh weather, and scheme all played a role. WRs Frank Ladson and Joseph Ngata were out with injury. Coach Swinney said he is “hoping for the ACC Championship game” that Ladson will be back. The WR rotation will be interesting to watch in two weeks when the Tigers play Notre Dame.

The game really got away from the Hokies when they started fumbling the ball away in the second half. After an interception in the end zone gave VT the ball at the 20-yard line, a penalty and then a fumble gave it right back to Clemson at the 12-yard line. They punched it in two plays later to go up 14. Later, trailing by 21 points, VT QB Hendon Hooker fumbled snap that CB Derion Kendrick scooped up and returned for a touchdown. That extended the lead to 28 and iced the game. VT lost a third fumble when LB Keith Maguire knocked it loose and DT Nyles Pinckney dove on it. Very few teams turn the ball over three times and keep it close against Clemson.

It was rather concerning to see both LB James Skalski and his backup Jake Venables leave the game. Fortunately, Skalski, who had surgery earlier this season and returned against Pittsburgh, was just sore and removed as a precaution. Unfortunately, Jake Venables may have broken his arm. We wish him a speedy and full recovery.

U of SC Hires Shane Beamer

Shane Beamer, the Assistant Head Coach and Tight Ends Coach at Oklahoma, has been hired by South Carolina to replace Will Muschamp. Beamer was born in Charleston and served as an assistant at South Carolina from 2007-2010, so he has deep ties to the state. Former Gamecock players who were coached by him reportedly supported the hire in a significant way.

The success of Dabo Swinney at Clemson has shown that experience as a coordinator should not necessarily be a prerequisite for a head coach. Making great hires, marketing a program, and recruiting can be more important. It will be interesting to see who he is able to attract to his open coordinator roles. As we’ve seen at Clemson, great assistant coaching hires play a huge role in the program’s success.