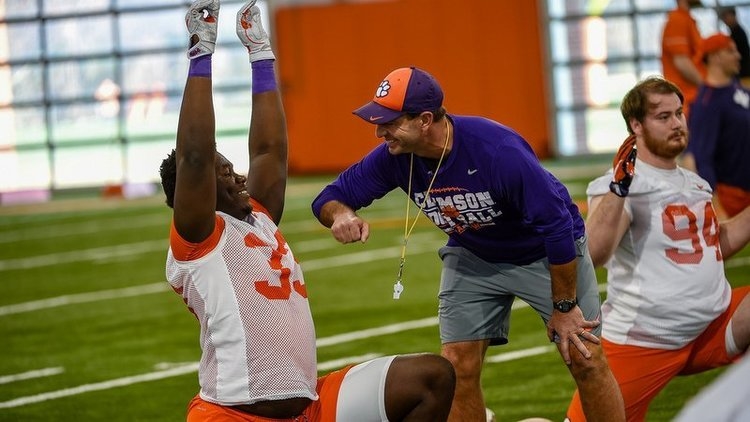 Swinney jokes with Ruke Orhorhoro at a recent practice

CLEMSON – Potty training is a dirty job, but somebody’s gotta do it. Namely, Todd Bates.

It’s no secret that Clemson’s defensive line is facing a reboot after the loss of all four starters and two valuable backups. Further complicating matters this spring is the loss of two players atop the depth chart at defensive tackle in Nyles Pinckney and Jordan Williams, who are recovering from injuries.

The Tigers held their first stadium scrimmage of the spring last Wednesday, and head coach Dabo Swinney told the media that Bates – whose wife is pregnant with twins – is getting a little early practice in the fine art of changing a diaper.

“I told Todd the other day, ‘Man, between those twins at home and all these babies he’s got, he’s changing a lot of diapers,’ ” Coach Dabo Swinney said. “And that’s kind of what we’re doing. We’re changing diapers every day with these guys.

“We’ll clean ’em up, put some baby powder on ’em and they look good for a little while and then just mess all over themselves, and we’ve got to change ’em again.”

Swinney hopes to see less of a mess and more independence when the Tigers kick off the 2019 season against Georgia Tech in late August.

“As a parent, one of the greatest days of our lives is the day your children are potty trained. Can I get an ‘Amen’ on that?” Swinney said. “There’s just a process you’ve got to go through. Children don’t just show up on this earth and know how to go to the bathroom. And it’s the same thing for a bunch of young D-linemen.”

The Tigers have plenty of talent on hand, and younger players like Xavier Thomas earned valuable snaps last season. Add in the talented KJ Henry, Justin Mascoll, Tyler Davis, Darnell Jefferies and a host of others and the coaches have the tools in place to once again make the Tigers’ defensive formidable in 2019.

Swinney especially likes what he sees from the young defensive tackles.

“The biggest thing I saw today was watching our guys inside compete better,” Swinney said. “Ruke (Orhorhoro), Etinosa Reuben, Darnell (Jefferies), Tyler Davis, Xavier Kelly – just seeing that group compete, they just looked more functional today. The biggest thing is the ‘want to’ is there, and as long as we’ve got that we’ll get better.”