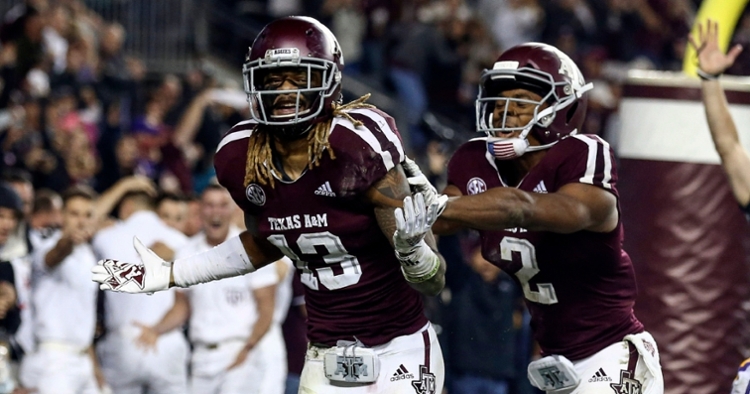 Kendrick Rogers, left, and Jhamon Ausbon are confident they will be ready for Clemson and the Death Valley environment. (USA TODAY Sports-Troy Taormina)

Texas A&M head coach Jimbo Fisher has gone out of his way this week to compliment head coach Dabo Swinney, the Clemson program, and even the Clemson fan base. His players didn’t get the memo.

No. 1 Clemson and No. 12 Texas A&M tangle this weekend in Death Valley in a 3:30 p.m. kick (ABC) that promises to be one of the best games of the early season. Fisher, who is familiar with Clemson after his days at FSU, spent a portion of his press conference this week calling Clemson a classy fan base.

Offensive lineman Jared Hocker was guaranteeing an upset, however, and many of his teammates didn’t hold back on their opinions of Clemson, last year’s 28-26 victory by the Tigers, Death Valley or this year’s game. A quick summary would read – Death Valley’s crowd noise won’t be an issue, the Tigers’ secondary is a weakness, Texas A&M beat themselves in 2018, and the fact that Clemson won a National Championship last season is a big old surprise.

Wide receiver Jhamon Ausbon said the Aggies made too many mistakes last season at Kyle Field.

“I think last year we had the mentality of fighting, but we had too many mistakes and ran out of time to make those mistakes up,” Ausbon said. “Definitely the mentality to not leave the field with a loss. I feel like we have to take more pride in the details and make less mistakes.”

Ausbon was asked if Clemson’s defense would be less of a challenge this season.

“Less challenging? I don’t know, that will be up to them to decide,” he said. “I definitely know that d-line wise, yeah, for sure. DB’s, I think they’re all back except for one guy. The d-line was a problem last year. I haven’t watched too much of them this year. They’re always coached great. It’s going to be a challenge. They’re the national champions and we have to come with our A-game just like every game.

Ausbon doesn’t care if the Aggies are underdogs.

“All we need is us. We don’t need to see any of that stuff. It doesn’t matter,” he said. “When we get between those lines, it’s us and them and they’re going to have to deal with us for 60 minutes.”

To that point, Ausbon hadn’t said anything out of the norm of a typical game week, but let some of his true feelings show when he was asked about the Tigers’ title last season and whether it came as a surprise and that there was “no way” the Aggies won’t win Saturday.

“I did. That one surprised me. That’s the motivation we have coming into this game because they won a national championship,” Ausbon said. “They’re a great team that game but we beat ourselves in that game. It just shows you how much you can do that. There’s no way we cannot win this game.”

Hocker said the Aggies won’t let Clemson get away this season.

“It was a hard-fought game. We came up close but didn’t get the job done at the end,” Hocker said. “This year I’m looking forward to our opportunity. We’re not going to let them slip away like we did last year. I like being the underdog because you always have something to prove. I’m excited for the opportunity. Yes (it makes them ripe for an upset). There will be an upset. I’m pretty confident in my ability and my team’s ability. “

Quarterback Kellen Mond said playing in the SEC means he’s prepared for what Clemson’s Death Valley has to offer.

“One thing about the SEC is pretty much every road game, you’re going to play in a hostile environment. I’m not sure about Death Valley,” Mond said. “We know it’s going to be loud. Coach Fisher has been there multiple times. It will increase the communication, but I feel good because we’re going to have a week to prepare for that.”

Wide receiver Kendrick Rogers said the Aggies were close to Clemson last season and have no doubt they are the better team this season. He also agreed with the assertion that Clemson's secondary is a weakness.

"After the game (national championship), we created a group chat and we were like last year we were this close. We had a little doubt last year but this year we have no doubt,” Rogers said. “I feel like it is (secondary is a weakness) I’m no coach but as a player, I feel like any secondary is susceptible to us.”

Rogers is also not concerned about Death Valley.

“I don’t know how loud it is,” he said. “We play in Kyle Field and it’s the loudest stadium so I’m pretty sure we can handle anything.”