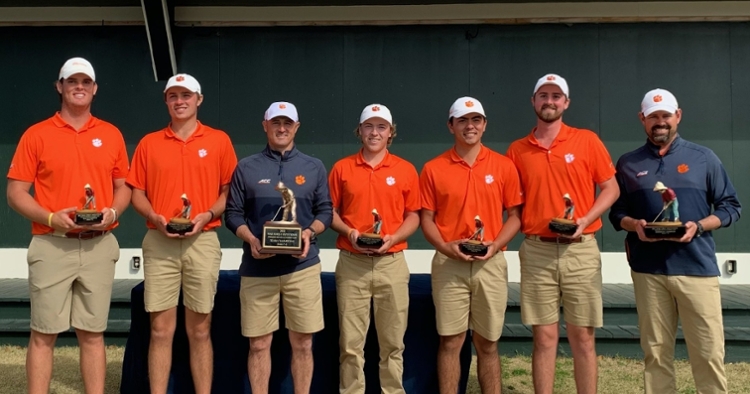 Clemson will be the number-four seed at the tournament

Clemson, S.C - The Clemson men’s golf team received an NCAA Tournament team bid for the 40th consecutive tournament on Wednesday afternoon. It is the longest streak of NCAA team tournament invitations in Clemson athletics history. Jordan Byrd’s first Clemson team will travel to the Scarlet Course at The Ohio State University Golf Club in Columbus, Ohio for the 13-team tournament to be held May 16-18.

The top five teams in the 13 team field after 54 holes will advance to the NCAA National Championship Tournament at Grayhawk Golf Club in Scottsdale, Arizona, May 27 to June 1.

Clemson has received a bid to every NCAA Tournament held since 1982 (the 2020 tournament was not held due to COVID19). Seven times Clemson has won the NCAA Regional and, in 2003, won the NCAA Championship.

This will be the first time Clemson has played in an NCAA Regional Tournament at the Scarlet Course, but the Tigers have competed in the NCAA National Tournament there four times. Clemson’s first appearance in any NCAA Tournament took place May 29-31, 1980. Head Coach Bobby Robinson’s team finished in a tie for 12th out of 32 teams that year. Former coach Larry Penley was one of the leaders of that team.

Clemson finished 11th out of 33 teams at the Scarlet Course in 1987 behind All-American Kevin Johnson, then finished 21st out of 30 in 1995. Penley’s team finished third out of 30 teams in 2002. D.J. Trahan led the Tigers at that 2002 tournament with an eighth place finish at three-under par.

Jacob Bridgeman is the leader of the Clemson golf team with a 70.37 stroke average for the year. He has finished in the top four in each of his last five tournaments, including two victories. He is coming off medalist honors at the ACC Tournament on April 23. His streak of five consecutive top four finishes is the longest for a Clemson golfer since D.J. Trahan had a six-tournament streak of top four finishes 20 years ago.

Bridgeman is second in Clemson history in career stroke average with a 70.73 figure and he is the school record holder in rounds in the 60s with 49. Bridgeman, who will make his debut in a PGA Tour event at the Wells Fargo Invitational on Thursday, is ranked second in the latest PGA University ranking.

Colby Patton has the second best stroke average on the Clemson team at 72.41. The second generation Clemson golfer has a pair of top 10 finishes this year, including co-medalist at the Wake Forest Invitational at Pinehurst #2. This will be Patton’s fourth appearance in an NCAA Regional Tournament. He finished eighth at the 2019 Regional in Austin, Texas. His father, Chris Patton, was Clemson’s second best golfer at the 1987 National Tournament at the Scarlet Course with a 304 score.

Kyle Cottam is a third Clemson veteran in the NCAA regional lineup. This will be Cottam’s fourth NCAA Regional as well. He finished 18th, second among Clemson golfers, at the NCAA Regional at the Golf Club of Tennessee, last year. This year, Cottam has a 73.37 stroke average with two top 10 finishes. He is a veteran of 45 tournaments and 138 rounds in his Clemson career, more than any active Tiger.

Freshman Kian Rose is third on the team in stroke average this year with a 73.44 figure. And has nine rounds at par-or-better for his 27 rounds. He is the only freshman in Clemson lineup.

Zack Gordon also will be in the Clemson lineup for the NCAA Regional. He has a 73.93 stroke average this year and has a pair of top 10 finishes. He shared medalist honors at the Wake Forest Invitational at Pinehurst #2 with teammate Colby Patton.

Clemson has finished in the top five of the regional to advance to the national tournament, six consecutive tournaments, including a tie for fourth place last year at the Golf Club of Tennessee.

We are the No. 4?? seed at the Columbus Regional played at OSU Golf Club! pic.twitter.com/V6MXRCrErP