Spring break for college students means a time to get away from campus and classes and find a beach somewhere to “relax.” For those that love college football, it’s simply a break from spring practice. That means it’s also a chance to take a look back at the first nine practices and see what we’ve learned.

Dabo Swinney’s Tigers have nine practices and one huge scrimmage in the books. They have this entire week off – Swinney was in Venice (not beach, Italy) and his players and coaches have scattered to the four winds. The team will reassemble next Sunday and practice a week from next Monday. There will be five more practices – including a scrimmage – and then the spring game on April 9th.

What have we learned through the first part of spring practice? I’ve talked to almost everyone I know in and around the program to find out. We did the offense earlier this week and now we concentrate on the defense.

There just aren’t as many questions with the defense. There are veterans all over the place and not many starting spots up for grabs. And this unit played extremely well last season. The biggest questions might concern the coaching staff, which has one game under its belt without Brent Venables. 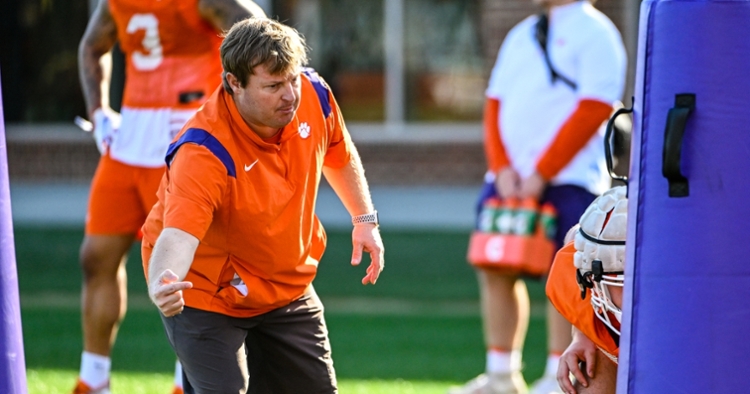 But that doesn’t mean we don’t have stuff to pass along.

The defensive tackles are doing just fine, thank you

A high school coach who watched the last scrimmage stopped me to rave about the entire defensive line, but he also talked about the defensive tackles. This group is without two stalwarts this spring – Bryan Bresee and Tré Williams are recovering from injury – but that has simply opened the door for guys like Payton Page and DeMonte Capehart.

“Yeah definitely, Payton has a bright future,” Goodwin said last Wednesday. “He has been great this spring. He has been really focused and he has gotten better every day. I can’t wait to see what the future holds for him. It’s very bright.”

Gone are James Skalski and Baylon Spector, who had combined for 122 career games and 520 career games. Those two were also two of the loudest voices on the defense. However, the guys taking their places aren’t exactly newcomers – Trenton Simpson, LaVonta Bentley, Jeremiah Trotter, and Keith Maguire have played a lot of football, and they are now stepping in as team leaders.

"Jamie and Baylon and Jake (Venables) and those guys, they were such great leaders for us," Goodwin said. "But it's been great to see (the 2022 linebackers) take the next step of becoming leaders of our defense, leaders of our team, being more vocal, being heard.

Goodwin likes what he sees and hears.

“Trotter, Keith, Vonta, and Trenton, they've all taken that next step and are growing into that role and becoming more confident in themselves and what they're seeing and getting us lined up," Goodwin said. "I've been really pleased in all four of those guys during spring ball.

"All of those guys in the linebacker room have been great. They're unselfish, they're team guys, they're learning to play every day with more confidence and being more vocal. So it's been great to see those guys. I've really been pleased with the work that we've put in."

The defensive ends – not a lot to say

This is a veteran group and everything we’ve heard has been outstanding. Former Clemson staffer Thad Turnipseed, who was a part of several National Championships with Nick Saban at Alabama and part of two at Clemson, told me once that the key for a team wanting to win the title is the defensive line. He told me in 2016 and in 2018 that Clemson had what it takes to win, and he was right. This group is deep and talented, and when you have guys like Xavier Thomas and KJ Henry and Myles Murphy putting in extra work after a grueling practice, it fuels the rest of the line.

One thing we haven’t heard is the status of two of the younger players, like Zaire Patterson and Cade Denhoff. However, we get to talk to ends coach Lemanski Hall next week, and hopefully he can fill us in on their progress.

The secondary? It’s going to be just fine

One coach told that maybe the most improved player on the defense this spring has been safety Jalyn Phillips. Phillips should combine with Andrew Mukuba to form a potent 1-2 punch on the back end of the defense. Mukuba is another one that seems to stand out during every practice and stood out during the scrimmage.

At corner, you have to figure that Sheridan Jones will grab one of the starting spots with the other still up for grabs. However, that group has also been mentioned highly by observers (and I like what I’ve seen when I’ve been out there).

However, corners coach Mike Reed said that with other talented players on hand - including Malcolm Greene, Fred Davis and Nate Wiggins from last year’s team and newcomers Jeadyn Lukus and Toriano Pride, no player has separated himself from the pack.

“Nobody has cemented any position out there,” Reed said. “I have not made a roster depth chart right now, so these guys are competing every day. Who knows who’s going to start? One may be better working with another guy. Who knows? I’ve got to find the best two, the best four, the best six because I play all my guys.”

“We’re in a better spot (at corner) than we were this time last year all the way around,” Swinney said.