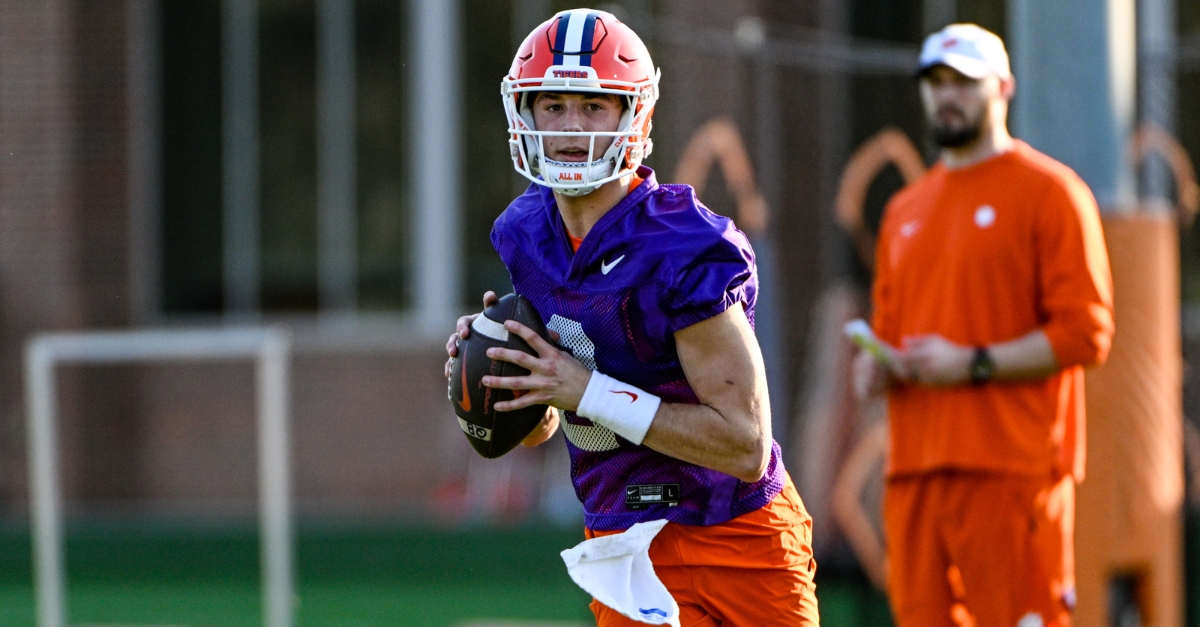 Cade Klubnik has impressed during the first part of spring camp.

Spring break for college students means a time to get away from campus and classes and find a beach somewhere to “relax.” For those that love college football, it’s simply a break from spring practice. That means it’s also a chance to take a look back at the first part of spring ball and see what we’ve learned.

Dabo Swinney’s Tigers have nine practices and one huge scrimmage in the books. They have this entire week off – Swinney was in Venice (not beach, Italy) and his players and coaches have scattered to the four winds. The team will reassemble next Sunday and practice a week from today. There will be five more practices – including a scrimmage – and then the spring game on April 9th.

What have we learned through the first section of Clemson's spring? I’ve talked to almost everyone I know in and around the program to find out. Today we start with the offense.

The quarterback room is deeper, and better

Hunter Johnson isn’t even on campus yet (he will enroll this summer) and already this room looks better. DJ Uiagalelei is slimmer, has a smile on his face, and looks like he has his confidence back. I spoke to one former offensive player who told me that everyone loves Uiagalelei, and only those on the inside know how last season unfolded (wide receivers run wrong routes, offensive line miss blocks, drops, etc). He appears to have rebounded from all of that and things have been clicking this spring. 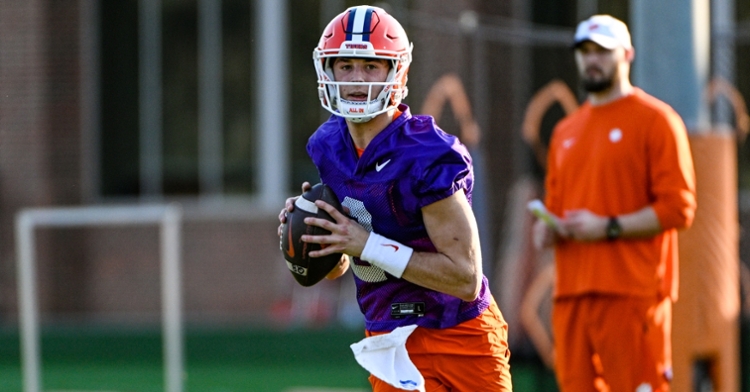 Cade Klubnik has impressed during the first part of spring camp. "

However, I’ve gotten the sense that freshman Cade Klubnik is pushing Uiagalelei and has impressed everyone around the program. Swinney said both had a fantastic scrimmage.

“Outstanding,” Swinney said of Uiagalelei. “Made some big plays. Managed the game. Took care of the ball. Good decisions. Very accurate. That’s what we’ve seen every day, and then Cade, same thing. Cade I though took a step today just growing in his confidence. The game is slowing down a little bit. He made some big plays, some nice throws. He’s a very accurate guy. He’s got a great presence to him.”

I was told that Klubnik had a rough first series in the scrimmage but then settled down and made some big plays.

Billy Wiles and Hunter Helms have also had their moments, and I’ve been told that both have made plays in camp. Add Johnson into the mix and you have to feel good heading into the fall.

At running back, there is Mafah and….

Phil Mafah is the only scholarship running back participating this spring – Will Shipley and Kobe Pace are recovering from injuries and Keith Adams, Jr., won’t be here until the summer. That means Mafah has gotten the majority of the reps this spring, and as one observer walked out of the facility after the scrimmage, he leaned into me and said, “He needs to be the starter. I’ve watched a lot of football, and he reminds me of all of those Alabama running backs, the big guys with enough speed to make them dangerous. He’s a weapon, and he’s getting better at catching the ball out of the backfield.”

Offensive coordinator Brandon Streeter told us last week that he wouldn’t hesitate to put Mafah into the game in any situation. We’ve also heard that Swinney hasn’t hesitated to pull players off the practice field this spring when they don’t perform – even the quarterbacks – and that the promise has been made that the best players will play. Again, fall will be interesting.

I asked Streeter about the offensive line last week. I stated that when I look at the line, I finally see one that – for the first time in a long time – reminds me of the lines back in 2016 and 2018. He smiled.

“I think you are right on with that,” Streeter said. “We have all the talent we need on the offensive line. No question. We have guys that haven’t played as much that have grown in these last couple of months. There has been a ton of improvement. As far as how physical these guys are, I couldn’t ask for a better group as far as grit and nastiness and pushing through some hurt and some injuries. There is plenty to work on, but we have talent. I am excited about the future.”

Moving Will Putnam to center was a concern, especially after the move of Matt Bockhorst to center didn’t work out. However, this looks to be a great move. These guys are big – go look at Tristan Leigh and Bryn Tucker and Dietrick Pennington and Marcus Tate – and the word from the linemen themselves is that feel like they are better from a technical standpoint than they were last season.

When I inquired how the line held up against that nasty defensive line in the scrimmage, I was told that, “They more than held their own and actually got some push in short-yardage.” That’s always good to hear.

This has been a big spring for tight end Jake Briningstool, who is getting the majority of the reps with Davis Allen and Sage Ennis sidelined. He has all the tools but needed to refine some of the more technical aspects of his game.

At wide receiver, we’ve heard nothing but good things about Joseph Ngata, but we’ve heard them all before. He just has to stay healthy, which has been a problem for this group the last few seasons. The oft-injured Frank Ladson has taken his ice packs and bandages to Miami. EJ Williams has missed the spring recovering from surgery.

Everyone had high hopes for Troy Stellato, the redshirt freshman out of Florida who has a ton of talent. However, Stellato injured himself early in fall camp last season and didn’t contribute much. That’s why it was frustrating when he was injured during the first practice of the spring, and when Swinney was asked about Stellato last week, he was short in his remarks.

Wide receiver Brannon Spector also missed last season but was impressive during the early part of camp. We were told that he missed the scrimmage last Wednesday with a sore wrist, but he showed up at Thursday’s Pro Day in a cast and it’s apparent he will miss the rest of the spring.

Beaux Collins and Dacari Collins have both built on their success at the end of last season, and Dacari looks like a breakout player.

And that brings us to Adam Randall. The early returns are all positive, and despite some experienced players ahead of him on the rosters, I am not sure he will be kept off the field in the fall.

"He's been excellent. I mean, he just naturally does some things," Swinney said. "First of all, physically, you could put him in an NFL locker room and he'd fit right in, but then you realize he's just a young player. Man, he made a couple plays today that were special, but just some little things as far as just some technique and some release technique. And just a lot coming at him with five days of installation, but he's exactly what we hoped he'd be. He's going to be great.

"Adam is a big physical guy that can handle himself in the boundary. But he's got all the skills he needs to play to the field or in the slot. He can really do all of them. I mean, Adam's played quarterback, wildcat, I mean he's done a little bit everything."