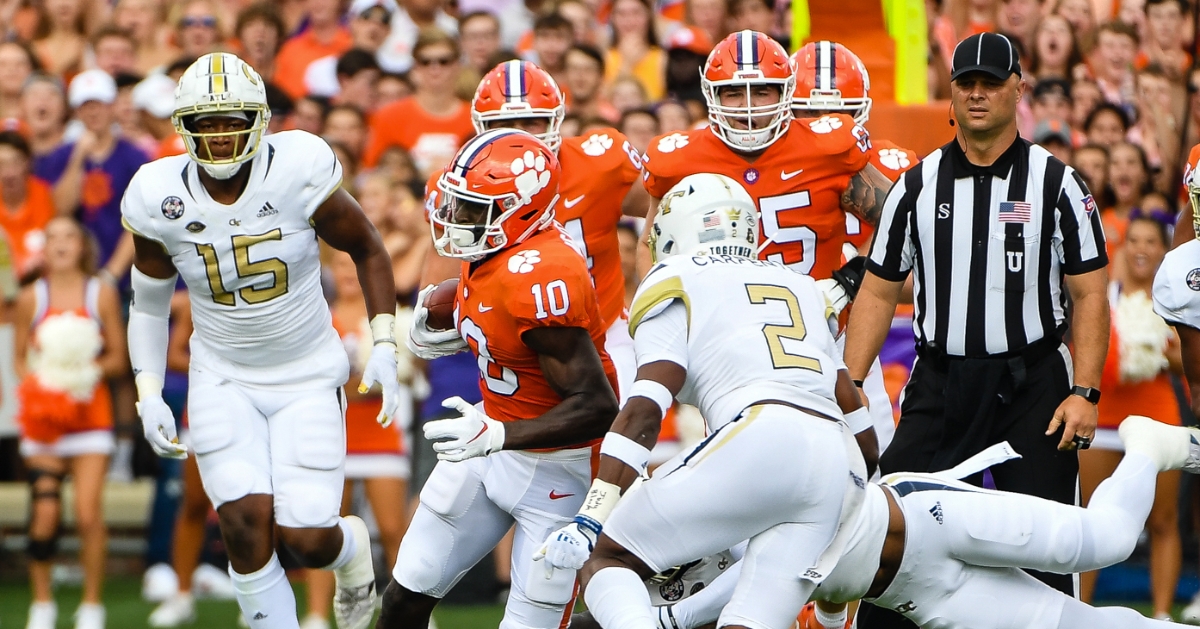 CLEMSON – Yes, Tony Elliott thought the offensive line would be further along than it is. No, he isn’t going to bench starting quarterback DJ Uiagalelei. Yes, he knows the offense has to find a way to make explosive plays.

Clemson is 111th nationally in explosive or chunk plays (plays that cover 10 or more yards). The Tigers have 32 plays that fit that criteria. In contrast, Ole Miss has 78 of those plays, while ACC schools like Virginia (67) and UNC (60), and Pitt (57) are all making their share. Clemson has just eight plays that cover 20 or more yards (118th), four that cover 30 or more yards, and just one of 40-plus yards (44 yards to Joseph Ngata against Georgia).

Elliott thinks the explosive plays will come as the offensive line continues to mature.

"I think the explosiveness will come as we continue to develop upfront. And the backs, Will Shipley is a freshman and Kobe Pace hasn't played a ton,” Elliott said. “So, it's going to take a little it time for all of those nuances to come together. We were moving the ball even if it's not what everyone thought it would be with explosive plays. They were dropping eight, so you're not going to find the explosive play. Against Georgia, we had a couple of potential explosives, but we weren't on the same page. South Carolina State, we were trying to establish the run game and be balanced. We have to find a way, especially with the downfield throws, to connect. And then DJ’s (Uiagalelei) confidence is going to grow as a result, the receivers' confidence will grow."

When it comes to the struggles of the offensive line, Elliott said he had hoped the line would be further along in its development.

"You know, we had a lot of hope coming out of camp that was going to be the situation. But currently, it is what it is,” Elliott said. “And in fairness to Marcus Tate, that's tough on a freshman. You prepare all week and then get to a game, and you look at something you haven't seen. We have to find more depth at that left guard position to help Tate in some situations. The guys are working hard, it's just taking a little bit of time for the cohesion and chemistry to come together. In the past, we've had it come together quickly. This is taking a little bit more time. As coaches, we have to do a good job of just trying to help them week in and week out as they try to find their cohesion."

Elliott said he never considered benching Uiagalelei in the win over Georgia Tech.

"Everyone likes the backup quarterback and the backup offensive coordinator. But it's football,” he said. “Guys are going to have to learn. We have to do a great job as coaches of nurturing. They are playing hard. Just technically we have to get a little bit better. Those are the things that are going to come with experience. Not asking anything from anybody (outside) other than trusting that we are doing everything we can."