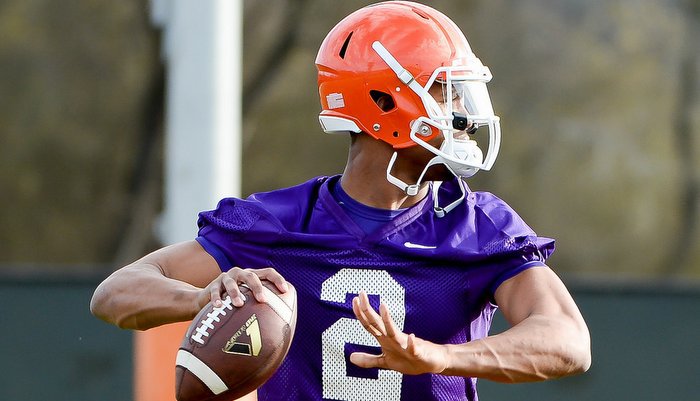 Other than the extreme windy conditions and the back-up place kicker, Saturday couldn't have gone much better.

Maybe the most impressive thing I noticed Saturday was the record crowd. Some schools don't draw 50,500 for a regular season game. At Clemson, we jam 50,500 in for a cold spring game.

The next best news of the day was the injury front. Unlike a few years ago, Clemson emerged from the game without any serious injuries. This team will now end the semester academically and head into an important summer healthy. Barring anything this summer, this team should be very healthy entering fall camp in August.

Deshaun Watson played briefly, but he dazzled in his only spring game. We all know he is the best player in the country. We didn't need another terrific performance to tell us that.

I may have been the only person impressed with Kelly Bryant. He made some mistakes, but I thought he looked better than we have seen him do far. He was more fluid and more accurate, especially early. If he can make one more jump this fall, I think he will be an excellent quarterback when called upon. Let's also remember Saturday was a tough day to throw the ball because of the wind. Nick Schuessler looked good again this spring, but I think Kelly will continue to win the backup job in August.

The running backs all ran hard and were effective. I thought Choice made a big move this spring. Gallman is the man here, but Choice gives you a good second back.

The wide outs were once again impressive and just think how good they will be this fall when Mike Williams and Deon Cain are back full time.

I liked the offensive line. There is depth and talent there. This is a strength heading into the fall. It is rare to find a spring game where you see two lines do not have many issues. Usually, you see major breakdowns in spring games because of the lack of depth.

On defense, I concentrated on the newcomers. Dexter Lawrence is a beast. I just don't see how you can handle him up front. The staff says Nyles Pinckney reminds them of Grady Jarrett, and that is spot on.

I watched Tre Lamar and Shaq Smith a lot. Lamar is as good looking a linebacker as Clemson has signed since Ashley Sheppard. He is inexperienced but looks the part.

In the secondary I watched Tanner Muse more than anyone else, and I am encouraged by his upside. I thought Jadar Johnson and Van Smith showed why they are the starters. Denzel Johnson has some nice upside but also showed some inconsistency. The corners had their moments of both good and bad, but that shouldn't be a surprise.

Finally, it was a great recruiting day. The staff had a bunch of top talent in town for unofficial visits and so far the results have been raved reviews.

In summary, Saturday couldn't have been much better. It was a good ending to a good spring. I will also add that I have never seen this much talent on the field at one time. August can't get here soon enough.