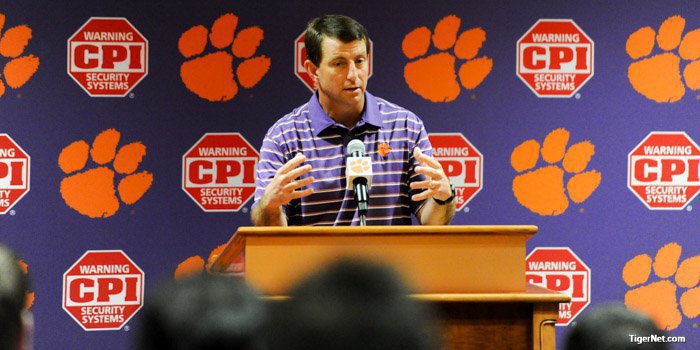 I couldn’t hear the show Monday but wanted your opinion of the quarterback situation. Where are you casting your vote? Thanks!

First, the podcast of every show can be found at wccpfm.com. Hope that helps. Second, I don’t get a vote. Dabo, Streeter, Elliott, Scott and maybe Pearman and Caldwell may get a vote.

But my opinion is Trevor Lawrence will take over at some point due to the following five factors:

*Clemson’s best weapons are at wide receiver. This offense is better when it gets the ball to its best players. The strength is in the wide outs. Lawrence spreads the ball better and utilizes the offense’s best unit.

The staff should and will keep the competition open. They don’t play a game until September. There is no reason to name a starter at this point. Let the competition play out. However, I think this will play out with Lawrence continuing to make a case too hard to ignore.

Recruiting seems like it is a run away freight train right now. Look into your crystal ball and tell me our best bets to round out the class. You da man!

It seems really early to round out the class, but since you asked I will give it a go.

QB (1-2)-I think they may take another, but they may be done with Phommachanh’s commitment.

RB (2)-Mellusi is the first of two here. The others I would watch the closest right now are Crouch and Ealy.

WR (3)-They have two in Spector and Ladson. The leading candidate to be the third is Ngata.

TE (2)-They have Lay and could round out the class with Deal. If not, Zipperer may be the other to watch.

OL (5)-The offensive staff likes taking its time to evaluate and is in no rush to fill up here. At this point names like Kristofic, Dobbs, Carroll, Jones, Correll, Knight, Medley, and Bowles are the ones to watch.

DT (3)-Several of the defensive ends above can play defensive tackle as well. This is a unit that doesn’t feature a bunch of names that jump out yet, but trust the staff here.

LB (4)-Constantin is the first of four good ones here. Crouch can play LB. Smith, DeLoach, Bentley, Maguire, and Thomas are the top ones to watch at this point.

S (3)-Charleston and Zanders are two commitments at this point. Hellams, Kelley and Cline jumpout at the top of the board for the final safety spot.

CB (3)-The staff would love three here and Booth, Jones and Battle might be at the top of the board here.

The numbers will change and I am sure the board will change a few hundred times, but those are my best guesses at this point. I still reserve the right to change my mind in two minutes. LOL.