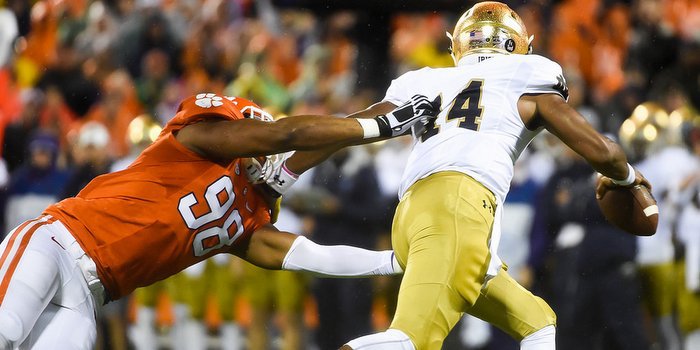 Yesterday we wrote about seven players on offense that have improved since fall camp. Here is a look at six players on defense and one special teams player that have made moves this fall:

When Kevin Dodd first arrived at Clemson, Brent Venables said he had no clue how to play the game. Venables said he was as undeveloped as any player he has ever coached. Coming into this season, Dodd had never started a game and was a veteran of only 219 plays where he totaled 21 tackles. This season Dodd has played 426 plays with 54 tackles. He is second on the team in tackles for loss and sacks with 10 and 4.5, respectively. He has nine quarterback pressures. Dodd has made huge plays this season including great technique on Notre Dame's failed two-point play.

Austin Bryant came in with high expectations as a four-star recruit, but it is tough for a true freshman to make this kind of impact. Bryant's role continues to increase. He missed a couple of games with an injury, but he played a big part in Clemson's pass rush against Florida State.

We knew Reader missed the first six games. What we didn't know was how he would play when he returned. Reader has played a bigger role each week. In his first game back against Miami, he played 17 snaps and made seven tackles. At NC State, he played 28 plays. This past week against FSU he had his first start and had five tackles in 30 plays. Reader is a massive body that gives the Tigers an NFL talent at defensive tackle.

This is a great example of player development. B.J. Goodson came to Clemson and played behind five-star linebackers like Stephone Anthony and Tony Steward for three years. He did start six games last season but had only played 311 snaps in his career coming into his senior season. This year he is second in the team in tackles with 86 and leads the team in first hits with 66.

Cordrea Tankersley had never started a game until this season and was considered a question mark entering the season. He has now started all nine games and has 32 tackles in 501 plays. Some thought the corner opposite Mackensie Alexander would be picked on this season, but Tankersley has been an All-Conference type of player. He leads the Tigers with three interceptions and is a physical tackler.

Adrian Baker played in only four games last season and had only one tackle. He now has two starts and has played 127 plays. Baker played very well in his start against Miami, but his marquee moment came this past weekend. With FSU driving to go up 14-0, Baker came up with his first career interception. If Alexander goes pro, Baker could have an inside track on a starting spot in his final two seasons.

When fall camp opened, I had no idea who he was or how to pronounce his name. However, we now know this freshman kicker who is 15-of-17 on field goals this season. Huegel has made ten in a row and is 13-for-13 in ACC games this season. This is another example of a player who we didn't know we could count on in fall camp but has made huge strides as the season progressed.