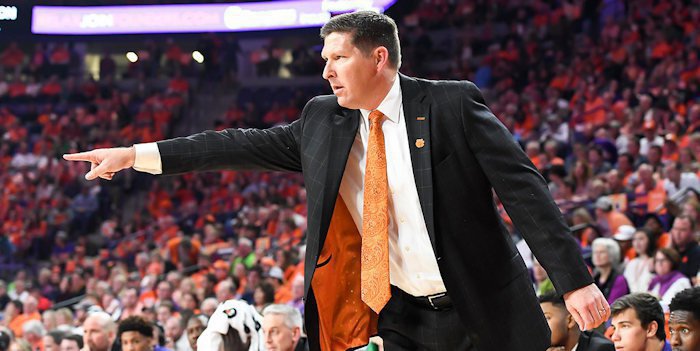 Despite the efforts of Coach Brownell to try to convince himself and anyone that would listen, Clemson never deserved a tournament spot and any bubble hope was lost in the games against NC State and the loss to a horrible Miami team. Let's face it, this Clemson team underperformed, had no chemistry, no discipline and could not close out a game.

The numbers don't lie and against the 8 ACC teams that had winning records, the Tigers were a miserable 2-9 and feasted on the bottom-feeding 6 ACC teams that were a combined 81-111. There were simply not quite enough wins against good teams, period The team just never clicked and honestly were not good enough to be a tournament team. If there is any expectation of winning at Clemson, there has to be a change in coaches. All mediocre things have to change.

I agree. This team did not deserve an NCAA tournament bid. I never felt this team grabbed any momentum from last season. They had bad losses to Nebraska and Miami. I also agree this team underachieved. There was something missing from this team most of the season.

I keep hearing good things about the new defensive linemen. Am I being too optimistic or are these guys going to surprise people this year? Thanks and Go Tigers!

Like you, I hear positive reviews on the defensive linemen. I guess we should actually talk about two different positions on the defensive line. I have never been too worried about defensive end. Xavier Thomas is going to be a star, but that isn’t really news. K.J. Henry is a former five-star that benefitted from a red-shirt season. Justin Foster and Logan Rudolph are solid players. I love Justin Mascoll’s upside. This cupboard was not bare.

At defensive tackle, we know the starters, Pinckney and Williams, are out for the spring. It is not fair to judge that unit, but I do hear good things about Xavier Kelly and Tyler Davis. I also like the upside of Ruke, Etinosa, and Cash. However, with the losses of Wilkins, Lawrence, and Huggins, there has to be a substantial drop off there.

My guess is this unit will take some time to develop. My other guess is Brent Venables will help out this inexperienced units with some scheme help.

Can you help with this project? We have some of players in the country visiting Clemson for the spring game. Many of those players will also visit Athens for their spring game. In the past few years, UGA has had close to a full stadium for their spring game, and it as made an impression and helped them to two great recruiting classes. Can you use your contacts at Tigernet and at WCCP to promote the spring game and the importance of having a packed stadium? This is the best opportunity we have ever had and the Class of 2020 can be the best in school the word out!!!!!

I will do everything I can. Thanks for the great email. This is a great time in Clemson football and we do need to capitalize on this opportunity. I will spread the word. See ya in Death Valley!

With the exception of the Rick Barnes years, Clemson has Not had a coach that exhibited a capability to go head to head in game coaching with a decent coach.

I was totally shocked that Clemson would give the Tommy Bowden of basketball an extension and raise last year.

Even if he had talent, he has not demonstrated an ability to coach. I can name 10 high school coaches who can coach Clemson's team to the same record as Brownell. I am totally sick of this notion of well he's a great person. Do we pay coaching salaries for winning records or for great personality? I am truly sorry, but we need another Terry Don Phillips who knows Greatness when he sees it to pick a basketball winner. Let's be real, Rick Barnes is a winner, remember the slab 5, Rick Barnes is the Steve Spurrier of basketball. Remember the old analogy that I think someone once said about Spurrier, he can take yours and beat his and take his'n and beat yours.

Brad Brownell is NOT that coach.

Also, I think Oliver Purnell was a great coach here. I think he turned the program around and did a great job in his time here.

With that said, I do understand your frustration and don’t blame you for being frustrated.