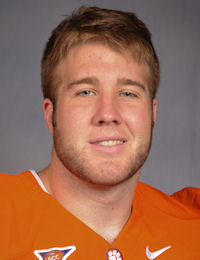 Offensive Tackle
B I O
Had 130 knockdowns in a school-record 3,131 snaps over 53 games (school-record 49 starts) in his career...started 39 games in a row...blocked against Jerry Hughes (TCU), Derrick Morgan (Georgia Tech), and Ndamukong Suh (Nebraska).

2009: Had 32 knockdown blocks in 14 games played...had season-high five knockdown blocks against TCU, Miami (FL) and Georgia Tech in the ACC Championship game...a big reason Clemson improved from 89th to 40th in the nation in rushing offense in 2009...had an 82 percent film grade at Miami for his top grade of the season...had an 80 percent effort in wins over Wake Forest and Florida State, both at home...Clemson was 7-0 when he graded 75 percent or better...played 77 snaps in the win over Boston College when he moved back into the starting lineup for the first time on the season...played well against TCU and All-American Jerry Hughes, who had just two tackles and no sacks against the Tigers that day...Hughes went on to become a first-round NFL Draft choice in April of 2010...had a solid performance in the Music City Bowl, he graded 77 percent for his 37 snaps as a starter and had four knockdown blocks as well.

2008: Started 10 games and played 12 overall...had a 74-percent grade, third-best on the team...had 26 knockdown blocks, sixth-most on the team...played 672 snaps, second-most among offensive linemen...began the season as a reserve offensive tackle behind Cory Lambert, but moved into the starting lineup when Chris Hairston was injured...played 23 snaps as a reserve against The Citadel and had a 72-percent grade...made his first career start against N.C. State and played 60 snaps...started 10 of the last 11 games...had a 77-percent grade in 48 snaps against S.C. State...had three consecutive grades of 78 percent, his high grades of the year...had a season-high five knockdowns against South Carolina.

2007: Red-shirted...enrolled at Clemson in January and participated in spring practice.

Before Clemson: All-America selection by PrepStar at East Wilkes High School...#13 offensive lineman in the nation by Scout.com...#14 offensive tackle in the nation by Rivals.com...#13 offensive tackle in the nation by CollegeFootballNews.com...#13 prospect in North Carolina by SuperPrep...#5 prospect in North Carolina by Rivals.com...named county defensive player-of-the-year by Wilkes Journal-Patriot during his senior season...had 130 tackles, 25 tackles for loss, 14 sacks, one recovered fumble, and 10 pass breakups as a senior...graded 85 percent on offense during his senior season...Shrine Bowl selection...graduated from East Wilkes High School a semester early in December of 2006 and enrolled in classes at Clemson for the 2007 spring semester...all-state and All-Northwest team selection during his senior season...selected twice to the all-conference team on both offense and defense...three-time all-county selection...recruited by Billy Napier...chose Clemson over East Carolina, Maryland, North Carolina, N.C. State, Tennessee, and Wake Forest.

Personal: Followed the footsteps of his father, Gary, who was a member of Clemson's 1981 National Championship squad...graduated on August 13, 2011 with a degree in management...born Mar. 9, 1989.