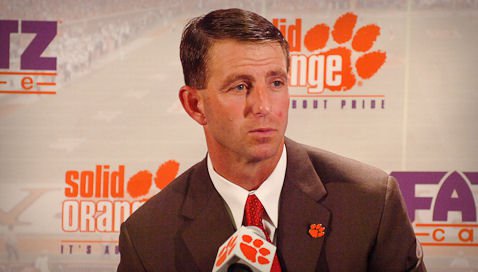 The national media hasn’t given much love to the Tigers, but Swinney said he expects his team will surprise some people.

I asked offensive coordinator Chad Morris what his record for a number of plays in a single game happened to be, and he said that when he was at Lake Travis High School in Texas they ran a whopping 99 plays in a 48-minute game.

With that in mind, I asked right tackle Landon Walker if he was going to start drinking Gatorade on Friday, especially with temperatures forecasted to be in the high 90’s Saturday afternoon.

“The process will start tonight,” Walker said with a laugh Tuesday morning. “Troy has a fast-paced offense, and we know it is going to be hot. We could be back out on the field before we get too much of a breather, so the hydration process will actually start tonight or tomorrow.”

*Running back Demont Buice is the only player questionable for Saturday’s game.

“They run a lot of screens and a lot of wide zone,” Swinney said. “They will empty out as well, so we will be challenged from a personnel standpoint. They will do some play-action and shovel passes, and they rely on yards after the catch. The biggest thing for us is lining up correctly and tackling.”

*Troy punter Will Goggans is one player that Swinney said he can’t wait to see on Saturday.

“Supposedly, he has a spectacular beard. I am anxious to see that.”

*Linebacker Quandon Christian played WLB last season, but was off the field during nickel and dime situations [which was a lot considering how many teams spread the field with three and four wide receivers]. The depth chart released Tuesday shows Christian now at SLB and Swinney said he will be on the field in the nickel package.

*Freshmen defensive tackles DeShawn Williams and Grady Jarrett will play, according to Swinney.

“They have been very consistent and very eager,” he said. “DeShawn and Grady both have very good futures. Neither one is ready to play, but we have to grow them up. They are going to be good players. I would hate to have to line up and start those guys right now, but if we can play them on our terms then by mid-season they are going to be solid backups for us.”

*New rule changes in college football this season have teams facing stiffer penalties for showboating and taunting – with points taken off the board in some cases – and Swinney said the new rule is going to cost some team a game this season.

“That is going to be a big deal on ESPN somewhere,” he said. “Because it gets called or doesn’t get called. That is something we have to address as head coaches. The last thing you want is for something stupid to happen. It will happen – Lord, I hope it’s not at Clemson. But it will cost someone a game this season.”

However, he doesn’t expect freshman wide receiver Sammy Watkins to be the recipient of such a call.

“Sammy Watkins is all business all the time,” he said. “Sometimes, I wonder if he even has a pulse,” he said. “I would like to see more emotion out of him sometimes, but he just goes out there and plays football.”

Center Dalton Freeman said if he ever had the luck to score a touchdown, he might have to get a flag.

“If I ever scored a touchdown, I would have to dunk it over the goal post.”

He was asked if he COULD dunk it.

“Oh yeah, I can dunk it. But I might not be able to after Coach Swinney got done with me.”

*The national media hasn’t given much love to the Tigers, but Swinney said he expects his team will surprise some people.

“I anticipate us having a very good year,” he said. “I think we are going to prove some people wrong.”

Part of the quarterback’s job is to read the safeties in order to get a feel for where the holes in the defense are going to be or to read the coverage, and Hall said Boyd has been a quick learner.

“Me and Meeks have lately been giving him a lot of different looks and trying to confuse him,” Hall said. “We started doing that after one recent practice where he just picked us apart. So we felt like we had to try and confuse him. But he is always coming up to me and asking questions.”

*Defensive coordinator Kevin Steele wasn’t’ available to the media Tuesday as he dealt with a personal issue.

“Absolutely. They are going to spread you out and throw it a lot,” Harbison said. “We are going to have to play well. It is going to be a lot of on-the-job training.”

*Defensive tackle Rennie Moore was asked about the gameplan against Troy, and he had one of the better quotes of the day.

“Everybody has a plan until they get hit in the mouth,” Moore said. “It’s just football, and at the end of the day it is just you against the other guy and who is going to win that battle.”

Moore was sent to the showers early following one such battle in camp – a fight against an offensive lineman – and he said he had no clue before practice started that his father was on hand to watch.

“I didn’t even know he was there,” he said. “He got me back in order pretty quick. It doesn’t take long to learn who is on top and who is on bottom.”

*There are 28 true freshmen and redshirt freshmen on Clemson’s two-deep depth chart that was released this morning.