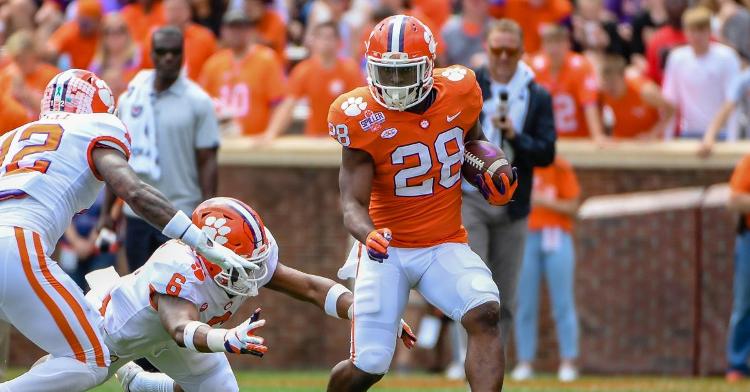 The Clemson-UofSC rivalry just got a little more interesting.

Former Clemson running back Tavien Feaster is headed to South Carolina via transfer according to multiple reports.

Feaster has a year of eligibility remaining and is on track to graduate this summer, meaning he can transfer to the Gamecocks (that has a Masters program Clemson doesn’t offer) without having to sit out a year.

Feaster just wants a place that will play him and help his future chances of playing in the pros.

"I look at it (UofSC) as a place that’s providing me with an opportunity to better myself and better my future,' he said recently. "I haven’t really looked at it from a fan’s aspect because that’s not my job and that’s not what I’m doing it for. That doesn’t really matter to me. What really matters to me is that I go to a place that’s going to use me and play me in the way that I need to be played. Checks all the marks that I need to check."

A picture circulated over the weekend that appeared to be Feaster's locker at South Carolina.

“I’ve been told the picture of Feaster’s locker that was leaked out Sunday is indeed his locker and was taken this weekend via Snapchat,” WACH's Mike Uva said via Twitter. “The photo was taken by a member of the Gamecocks program but it was never intended to be released to the public.”

A photo of Tavien Feaster’s Gamecock locker has emerged, sparking speculation that the ex-Clemson running back is transferring to South Carolina. No word from the #Gamecocks just yet. @abc_columbia pic.twitter.com/fdi1no1TYY

Clemson coach Dabo Swinney wishes Feaster nothing but the best for his future.

"Tavien has informed us that he has entered the transfer portal with the intention to finish his degree at Clemson by August and continue his college career somewhere else,” Swinney said recently in a press release. “We appreciate Tavien for everything he brought to Clemson University and our program and we wish him nothing but the best moving forward.”