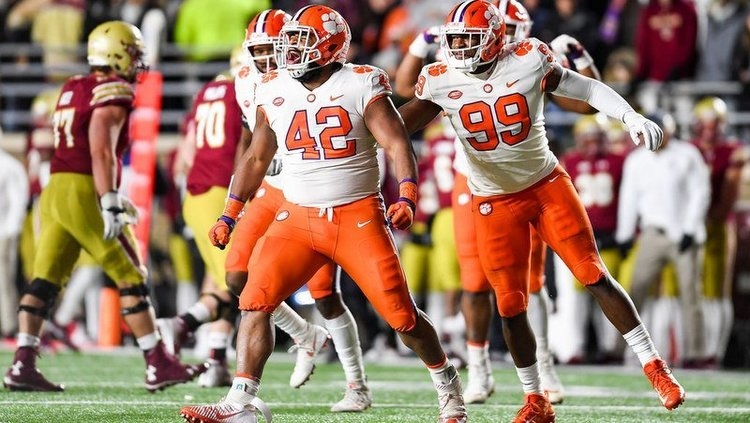 CLEMSON, S.C. — With the announcement of the 2018 American Football Coaches Association All-America Team on Wednesday, all five All-America teams recognized by the NCAA toward consensus status have been formally recognized for the 2018 football season. Five Clemson players earned at least one first-team All-America selection, featuring a unanimous honoree among a school-record three consensus selections this season.

Presently, All-America teams recognized by the NCAA include ones awarded by the Associated Press (AP), American Football Coaches Association (AFCA), Football Writers Association of America (FWAA), Sporting News and the Walter Camp Football Foundation (WCFF). To earn consensus status, players must appear on the first team of at least three of the five lists, with unanimous status being reserved for those who appear on all five.

By earning inclusion on all five first teams, defensive tackle Christian Wilkins became only the fifth unanimous All-American in Clemson history. He joins Terry Kinard (1982), Gaines Adams (2006), C.J. Spiller (2009) and Da’Quan Bowers (2010) as the only unanimous All-Americans in school annals.

In addition to Wilkins’ unanimous selections, tackle Mitch Hyatt and defensive end Clelin Ferrell also earned consensus All-American status by each appearing on four of the five lists. Clemson’s three consensus All-America selections in 2018 mark a first in school history, surpassing the previous record of two set during the 1981, 1991 and 2015 seasons.

Wilkins joined Houston's Ed Oliver and former Georgia RB Herschel Walker as the only three-time AFCA All-Americans in the 74-year history of the team.

As noted above, Wilkins is the fifth Clemson player to earn unanimous All-America honors in school history and the first since Da’Quan Bowers in 2010. Three of Clemson’s five all-time unanimous All-Americans have played on the defensive line (Adams in 2006, Bowers in 2010, Wilkins in 2016), and four total have played on defense when expanded to account for Kinard’s selection at safety in 1982.

Ferrell’s consensus All-America selection builds upon a standard of excellence that has been set at defensive end for Clemson. Prior to 2018, five of Clemson’s previous eight consensus All-Americans had come from that position group, including consensus qualifications for Gaines Adams (2006), Da’Quan Bowers (2010), Vic Beasley (2013 and 2014) and Shaq Lawson (2015).

With his selection by the AP, Ferrell also became Clemson’s first two-time, first-team AP All-American since Terry Kinard (1981-82) after earning first-team honors in 2017.

Hyatt is a big reason Clemson is averaging 259.8 rushing yards per game and 6.8 yards per carry. The Tigers have also allowed just 14 sacks in 13 games. In his four-year career, he has played 3,624 snaps, most by a Tiger in history.

With his selection from the Sporting News, Etienne became the first Clemson running back to earn first-team All-America honors from one of the five presenting organizations since C.J. Spiller’s unanimous selection in 2009. Etienne and Spiller account for two of Clemson’s three all-time selections at running back, a list that also includes Terrence Flagler’s first-team honor from the FWAA in 1986.

Junior defensive lineman Dexter Lawrence (Wake Forest, N.C.) was named a first-team All-American by AFCA on Dec. 12. With Lawrence’s selection joining the previously announced honors for Ferrell and Wilkins, Clemson has now had three defensive linemen earn a first-team selection from one of the five teams for a second straight year, as Ferrell (AP), Wilkins (AFCA) and Austin Bryant (FWAA) all collected first-team honors in 2017.