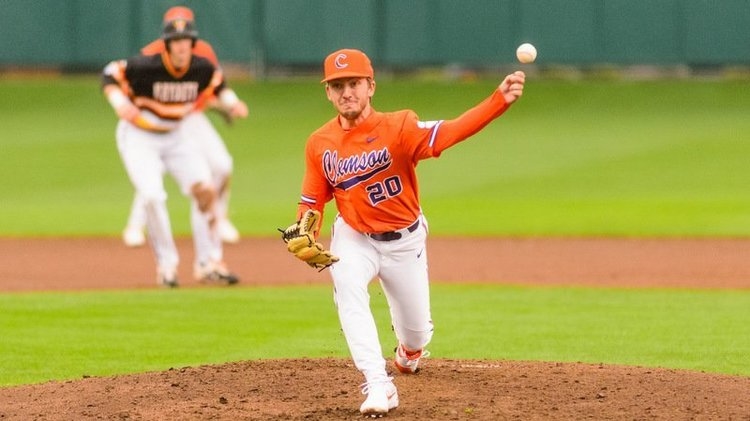 Clark improved to 4-0 on the season with career highs in innings and strikeouts (7).

CLEMSON, S.C. - Mat Clark set career highs for innings pitched (7.0) and strikeouts (7) in No. 12 Clemson's 5-1 victory over Notre Dame to even the series at Doug Kingsmore Stadium on Saturday afternoon. The Tigers upped their record to 14-4 overall and 4-1 in the ACC, while the Fighting Irish dropped to 7-10 overall and 3-2 in ACC play.

Clark (4-0) earned the win by allowing just three hits, no runs and no walks. He retired all 12 batters he faced in the third, fourth, fifth and sixth innings. Holt Jones pitched the final 1.1 innings to record his second save of the year. Notre Dame starter Cameron Brown (0-2) suffered the loss, as he surrendered nine hits, five runs and two walks with six strikeouts in 7.0 innings pitched.

The series concludes Sunday at 1 p.m., on ACC Network Extra. Kids can run the bases after the game.

Clemson-Notre Dame box (game two)
ONE DAY ONLY! Fanatics.com Black Friday Sale 20% off on orders over $75
Comment on this story