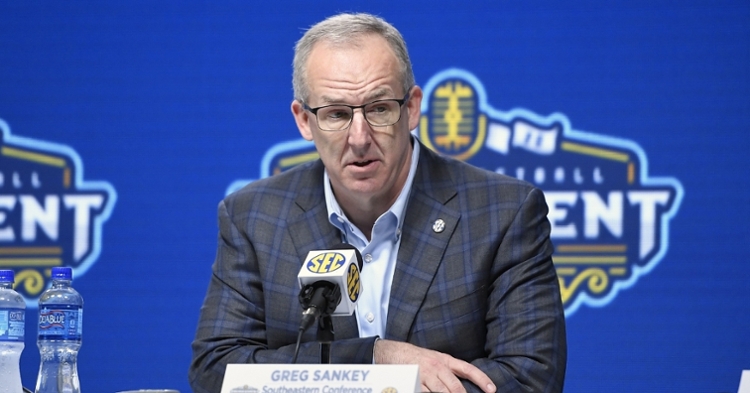 Under four months after his league decided it couldn't continue its rivalries with the ACC safely this season, Southeastern Conference commissioner Greg Sankey called out the ACC for its recent decision to adjust its schedule.

With that trio in mind, the ACC cited "integrity of the ACC Football Championship Game" for cutting down each team's season to nine games to be carried out over the next two weeks -- Clemson and Notre Dame wrapping things up this weekend and Miami getting games in over the next two.

The SEC's Sankey sees ulterior motives in the move, with No. 2 Notre Dame and No. 3 Clemson heavy favorites this weekend and getting a week off before their title game.

"I was surprised to see the announcement (Tuesday)," Sankey told CBS Sports. "It begs one question: If their two most highly ranked teams were, for instance, (ranked) five and six in the CFP Rankings, would this decision have been made?"

Of course, Clemson's end of the deal has gained plenty of notoriety after going through all the motions to play at Florida State, only to have FSU's medical group unable to agree to play with hours to go to kickoff. Clemson coach Dabo Swinney has maintained strongly that his team has gone through the right process for the first nine scheduled games (through FSU) and then these final two with Pittsburgh and Virginia Tech.

"This is what was planned for us though," Swinney said after practice Wednesday. "We were planning for this to be our last regular season game and we didn't have a game scheduled for next week and obviously we all know what happened there. I really thought we would be playing next week. I was as surprised as anyone when I came off the practice field that they kinda made the change. Hey, we're going into game 10. Wish we had 11. Thankful we got an opportunity to play 10 and proud of our guys for how they competed all year. You work all year to get to a point like this where you truly can have a chance...to punch a ticket to Charlotte."

Sankey had more to say on the topic.

"We committed to playing a 10-game schedule, which is certainly unique to see some other decisions this week," said Sankey to CBS "where they indicated one direction and they changed at the last minute."

Sankey then cited that their call preseason to play more league games -- and in an FBS pandemic structure that has No. 4 Ohio State having played four games to this point, an understood gentleman's agreement on games played.

"We could have played an eight-game conference schedule," Sankey said, "but we understood looking at the season we would assist ourselves in this postseason evaluation by adding quality games. SEC games are quality games. We're still on that path.

"We felt that others were on that path, too. We understood back in August and September people made decisions to not play, yet made decisions based on clear understandings of the expectations. One of those expectations is about the number of games played."

Wait so the SEC is mad Clemson and Notre Dame are going to wind up playing 10 total games ... the same number as ... checks notes ... Alabama, Texas A&M and Florida have scheduled in the regular season? https://t.co/82UEnYhJL0