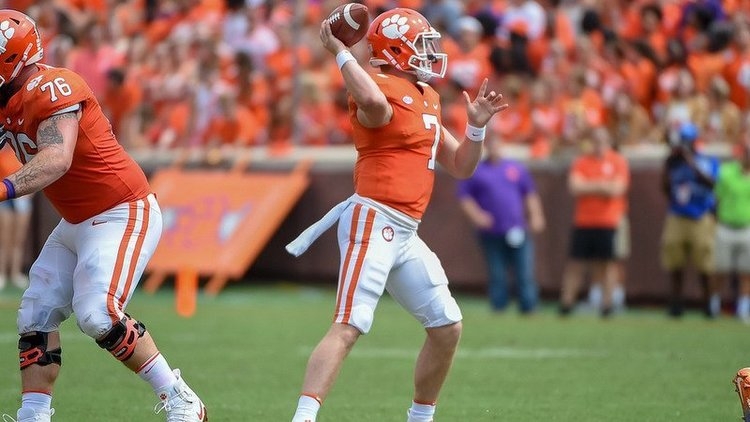 Brice made his completions count for big plays down field.

A week after a full 72-man travel roster saw action at Georgia Tech, the rotation looked very different in Death Valley versus Syracuse, for a variety of reasons.

Noting some of the movement (full depth chart-plus listed below):

* With starting right tackle Tremayne Anchrum out early due to injury (ankle), redshirt junior Gage Cervenka stepped in on a shuffled O-line mix and made an impact - particularly in the running game - with his career-best 58 snaps. The starting quartet of Mitch Hyatt (85), Sean Pollard (85), John Simpson (79) and Justin Falcinelli (75) all played 75 or more snaps.

* Freshman tight end Braden Galloway played his fourth game of the season and was in on some crucial plays down the stretch. He played his second-most snaps of the 2018 campaign (9).

* It's noted below but we are five games into the season and therefore some redshirt calls are officially in (played more than four games) with most being no-brainers in Xavier Thomas, Trevor Lawrence, Ross, Derion Kendrick, Kyler McMichael and B.T. Potter. McMichael was called into duty with Trayvon Mullen's injury (ankle) and he posted a tackle in his 28 snaps. Thomas grabbed the game's lone sack and has played double-digit snaps in four of his five games (20 per in the last two, with 6 tackles and a sack).

* Clemson paired down its rotation as much as anywhere at linebacker versus Syracuse's uptempo scheme, with Kendall Joseph returning from injury to lead the way (62; 12 tackles) in a 5-man group (from nine at Georgia Tech).

Here’s a larger look at week five on the Clemson participation report:

(Players assigned positionally by place on the depth chart; the initial participation report is provided by Clemson and represents all non-special teams snaps; season totals in parentheses; this breakdown notes all depth chart contributors and select scholarship players)

(Fields was out due to violation of team rules; Powell was out for an academic issue)

* Expected to redshirt (can play in four games; has played in one).

** Missed significant time or was out due to injury.