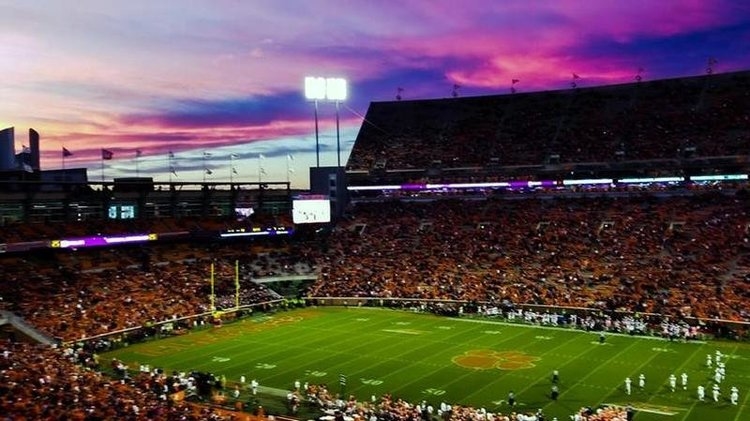 ESPN’s First Take debated Monday whether the NCAA will have a college football season starting in the fall due to the novel coronavirus outbreak.

College GameDay’s Kirk Herbstreit said last week that he would be “shocked” if college football was played in 2020.

“I’m far more optimistic and more hopeful than Kirk’s quote there at this point," GameDay colleague Rece Davis said Monday. "I just think that’s a little bit premature at this juncture, while offering the caveat that there is so much unknown out there. Kirk’s right based on everything I’ve read in terms of medical experts, in terms of the vaccine. But I’m hopeful and optimistic that with so many people working on this that we’re going to have, at least, some kind of treatment, that there will be some type of break over the next several weeks that perhaps will make it far more feasible to have football.

“At this point, I’m far more optimistic. Might there be adjustments in the schedule? Might things change a little bit in terms of how the business is conducted? Sure. Because so many things have happened that we didn’t envision 6-to-8 weeks ago. But I’m much, much more optimistic that we will have football in the fall. At least at this point as far as what you can ascertain at the moment.”

Herbstreit’s skepticism over games being played this fall pointed toward what he’s heard from those in the medical field thus far.

"As much as I hate to say it, I think we're scratching the surface of where this thing's gonna go."

Stephen A. Smith agreed with Davis, while Max Kellerman was more on Herbstreit’s cautious side.

“I want everything to start on time but that may be magical thinking,” Kellerman said. “The most optimistic report that I’ve read even that seemed credible was that there’s one company that has a different way to develop vaccines that believes we could have something by November and ramp up doses to a million doses a month. That’s the most optimistic thing I’ve read that seems credible at all. This is a country of hundreds of millions. While I appreciate you guys’ saying, ‘Hey, there must be a way.' A sober analysis of our situation is if Kirk’s premise is right that we need a vaccine in order to get to life as normal...I think he may be right guys.”

Watch more of the debate below: