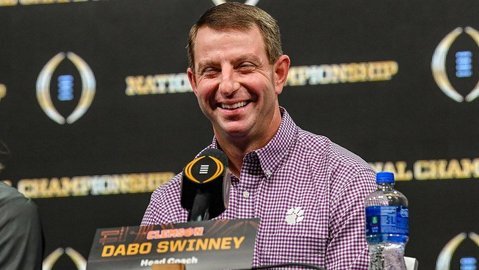 Swinney and Co. will be playing in the upcoming Playstation Fiesta Bowl

Clemson head coach Dabo Swinney was named a finalist for the Bobby Dodd Trophy Coach of the Year award on Tuesday given to the college football's top head coach with "leadership and integrity" as core values.

“The Dodd Trophy is the sport’s most coveted coach of the year award because it is reserved for the most impactful coaches in all areas of a student-athlete’s success,” said Gary Stokan, Peach Bowl, Inc. CEO & president. “This group has separated itself from the rest of the field this year and together have delivered some of the best moments and stories from a fantastic year of college football.”

Swinney is the only previous winner of the group as he won the Dodd Trophy back in 2011.

The winner will be announced during bowl week of the College Football Playoff Semifinal.