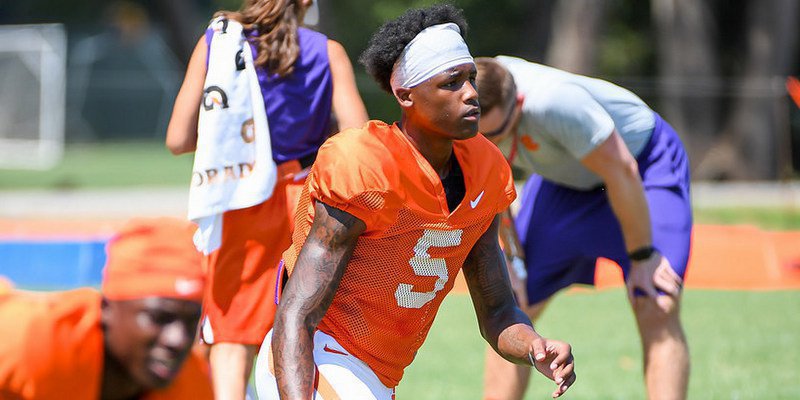 Tee Higgins has shown a great attitude since arriving on campus

The beauty of the photo is that all six played at Clemson at the same time, and all six are currently playing in the NFL. The Tigers are known around college football – everywhere outside of Tennessee – as Wide Receiver U because of their ability to not only recruit receivers at a high level, but develop them and send on to the NFL. Add in Artavis Scott and Mike Williams (now with the Chargers) and Clemson has a rich history of sending wide receivers into the league.

Some lucky photographer needs to grab a similar picture this season, because Scott believes he has nine scholarships that can all play at the next level if they continue to work hard and develop. The next wave of great receivers arrived over the summer in Amari Rodgers and Tee Higgins, and that talented duo will join redshirt freshman T.J. Chase as the next group chasing an NFL dream.

Scott cautions, however, that the youngsters haven’t accomplished anything.

Tee Higgins has shown a great attitude since arriving on campus "

“I think the key word is potential right now. Because you are adding in Tee Higgins and Amari Rodgers, two talented freshmen that haven't played one snap at this point,” Scott told TigerNet this week. “But I am very pleased with the group, I feel like we have nine scholarship guys that can play. They have done a good job in practice and I am really pleased with the entire group.

Chase sometimes gets lost in the hoopla surrounding the arrival of the two freshmen, but Scott says that Chase’s teammates and coaches have taken notice.

“As a coach, what you're looking for in a wide receiver is someone that plays fast and T.J. does that. Someone that knows their assignments and doesn't have a lot of missed assignments and T.J. has done a really good job of that,” Scott said. “And the third thing you're looking for is someone that makes plays and finishes plays on contact. Because 70 percent of the time when these guys are catching balls they are having contact happen at the same time. And T.J. has done a really good job of that. I think he's had an outstanding fall camp and I have no doubt he'll be ready when his number is called. And when he goes out and makes plays it will only help him going forward.”

“Amari got off to a really fast start. What you get with Amari is that he is a lot more mature than your average freshman coming in. His perspective, his work ethic, his understanding of what we're trying to do offensively, understanding defenses,” Scott said. “He goes in and studies film after practice, stuff you might expect out of a junior or senior. He came in doing that, so that put him further ahead. He had to battle back through some minor injuries and setbacks, but he's definitely further along than the typical freshman we have had come in here and that is saying a lot. I look for Amari to be a guy that will make a big impact this year, and sooner rather than later.”

Higgins is a former 5-star that doesn’t act like one.

“Tee, the thing I love about him is his attitude. He is not one of these guys walking around like he's Johnny Fivestar,” Scott said. “He is very humble, and does a great job of learning from his teammates. He's a perfectionist. I think he has done a better job than in his mind he thinks he'd done because he is very hard on himself. That is how the great players are. He has an unbelievable ceiling. For him, it starts with game one, and when he gets those opportunities making the most of them. I think he is looking forward to that new challenge.”