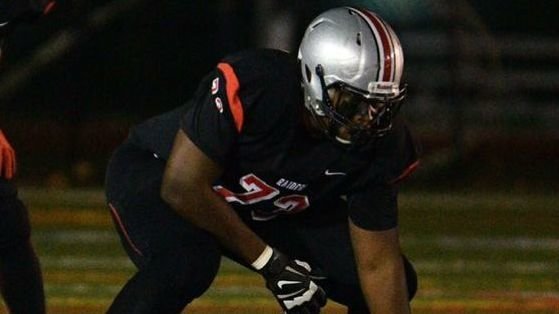 Wallace knows all about Clemson

One of the nation’s top-rated 2019 offensive linemen caught his first look at the No. 1 Tigers in person toward the end of the season.

He’s no stranger to Clemson and the Upstate, however.

Four-star offensive guard prospect Caedan Wallace announced on social media recently that he was “truly blessed and honored” to receive a Clemson offer.

The Princeton, New Jersey product made stops around the East Coast for unofficial visits this season, including a Sunshine State swing through Florida, Florida State, UCF and South Florida – and also South Carolina, where he watched Clemson’s 34-10 rivalry win.

That trip was a bit of a homecoming for Wallace, who was born in Greenwood and has family around the state. Wallace moved to the Atlanta area when he was a young and then to New Jersey before high school, but those Upstate ties have brought him back to the area frequently.

Although he never picked a side, he has family on both sides of the rivalry.

“I was born in South Carolina and my mom went to the University of South Carolina,” Wallace said. “Just growing up, I remember she would always talk about Clemson and the rivalry and stuff like that. I’ve grown up on football.

“Clemson’s name has always been relevant in college football.”

Clemson defensive coordinator Brent Venables extended the offer to the 6-foot-5 and 315-pound lineman. Wallace says he had been in contact with Venables over the last couple months and he said that Venables and other coaches were impressed by his game film.

“Just speaking to him, he wants guys that are a great fit for the school,” Wallace said. “He seemed like a great guy already. I’m looking forward to getting to know him.”

Wallace said Clemson coach Dabo Swinney and Venables were curious what he thought of the Tigers while on his visit to Columbia.

“I told them both the same thing,” said Wallace. “It was high-intensity. They’re really aggressive and they really don’t make mistakes on the field, which is a great combination for great football. They played extremely well.”

Rated a top-100 prospect by Rivals, Wallace counts physicality in the run game and overall intensity play-to-play as his strengths. He says he’s focused on improving his game all-around in the offseason.

Wallace is eyeing a Clemson visit either in January or one later in the spring. He said he expects to put together a top schools list in February or March, while he isn’t deciding anytime soon, he added that he isn’t the type of prospect to pick out a hat on Signing Day.

Wallace says a visit will offer some key insight for his decision.

“I want to see a great coaching staff and genuine people,” said Wallace. “You see people’s personalities on TV or sometimes on the sideline, but you never really get to see how they are face-to-face until you truly meet them. I’m really looking forward to meeting the coaches and seeing how they are and seeing the program is family-oriented and really just how they run their program.”

Truly blessed and honored to receive an offer from Clemson University???? #ALLIN pic.twitter.com/aPP1ul2Ovy

For the latest on Clemson's 2019 class, check out our targets page.