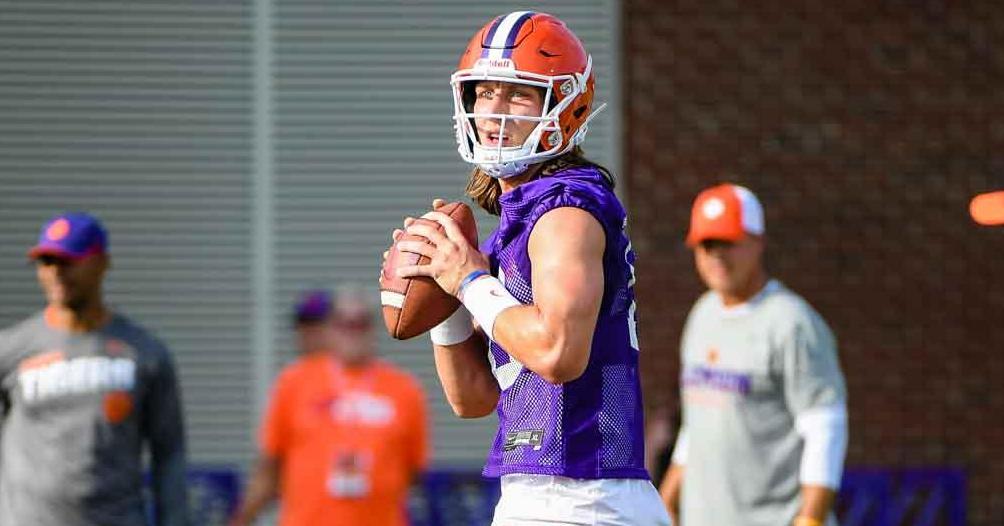 Lawrence works out during practice

CLEMSON – The sky is the limit for Trevor Lawrence and the Clemson offense.

The Tigers finished third nationally in total offense last season, averaging a little over 527 yards per game. Clemson was fourth in scoring offense, averaging 44.3 points per game. The offense was also balanced – the 2018 season joined the 2015 season as one of only two in school history to feature 4,000 passing yards and 3,000 rushing yards. Clemson, Oklahoma, and UCF were the only FBS programs in the country to average at least 245 yards passing and 245 yards rushing per game in 2018.

Back is an experienced offensive line, running back Travis Etienne, what could be the nation’s best group of wide receivers and Lawrence, the nation’s top quarterback heading into the season.

"The sky's the limit for our group," Lawrence said. "You saw last year kind of us start clicking, and I think that's one thing where we are picking up where we left off from last year. Having those guys back is really awesome having that continuity with the whole offense. We didn't lose many guys, we lost a few really good players, but we also have a ton that have been prepared and waiting for their time."

Lawrence has wide receivers like Justyn Ross, Tee Higgins, Diondre Overton, Amari Rodgers, Cornell Powell, TJ Chase, Frank Ladson, Joe Ngata, Will Swinney, and Brannon Spector to throw to, and he realizes how fortunate he is to have playmakers all over the field.

“It's great having guys like that. Coach (Brandon) Streeter tells all the time to just do our job and everything else will take care of itself,” Lawrence said. “Keep it simple and those guys will make plays for you. It's awesome having guys like that out there where you can do your job and get a 1-on-1 matchup and you can take it and you don't have to worry about them coming down with it because they do most of the time. It's not like that a lot of places so I know how blessed we are to have guys like that.”

Fans can expect to see a more mature Lawrence under center this season – he was thrust int the starting lineup after game four last season but has had an entire offseason, spring practice, and summer to bond with his teammates and it’s made a difference.

“I think it's just confidence from having a year under my belt. And it's getting to know all of these guys. We've grown really close this offseason and this summer,” Lawrence said. “Getting out here in camp is about growing together and I feel like we've done a really good job.