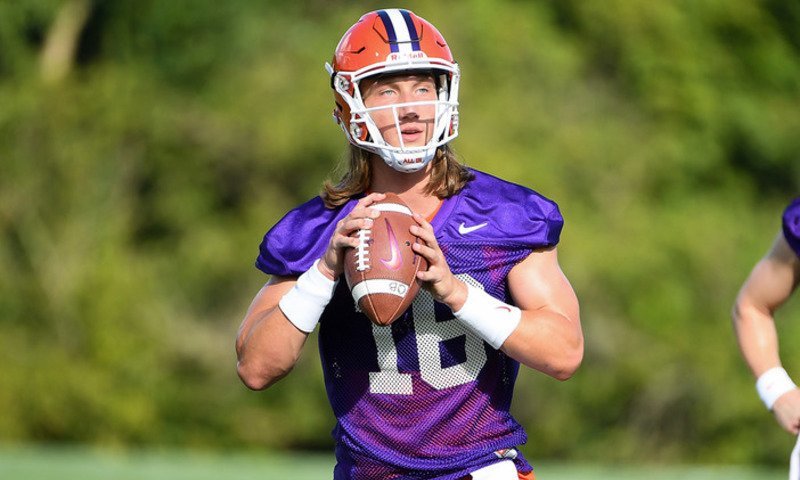 Elliott is unsure how much starting quarterback Trevor Lawrence will play

CLEMSON – Tony Elliott doesn’t know what role he will play during Saturday’s spring game, whether he will have head coaching duties or be an offensive coordinator for one of the teams. He does know that he wants to be on the sideline, and he has a wish list of what he wants to see.

The National Champions will play their annual spring game Saturday at 2:30 pm inside Death Valley and Elliott knows what he wants to see.

"Communication leads to execution. And then just competition. I want to see guys go out and compete and show us that they can play in front of a big crowd. We're expecting and anticipating a big crowd. We want to see guys - especially guys that have not been in that situation - see how they function in that environment. And then, take care of the quarterback and take care of the ball. If we can start there, then I think we'll have a good day.”

How much will starters Travis Etienne and Trevor Lawrence play?

"We haven't really discussed that yet, it's still early in the week,” he said. “We're just trying to get better today; we have a half scrimmage today with some situational stuff. We split it up with one-two's and had an opportunity to see those guys compete. We'll evaluate it and split the teams up. I'm in a situation now with a couple of guys banged up that all those guys are going to have to go on Saturday."

Clemson’s offense should once again be one of the nation’s best, and Elliott said he'd seen explosiveness during scrimmages.

“It's hard to compare because it's a different unit. Obviously, we're trying to work somebody in at center,” Elliott said. “Travis is performing at a high level. Tavien (Feaster) and the rest of the backs have been pretty solid throughout the spring. We're breaking in the new tight end. It's a little bit different, but overall we've had some good days. There was one day where we could have done better right before spring break - didn't quite have the right focus that we wanted to - but overall I've been pleased.

"We've been very explosive throughout scrimmages. Not quite as efficient as we've been in the past - that's an area that we're really going to challenge these guys to stay ahead of the chains and not just try to rely on the explosive play. Whereas, last year we were just trying to figure out how can we generate the explosive play because we were very efficient in 2017. So, it's a little bit, different group. Their chemistry is starting to come together, but we're still a long way from where we need to be."