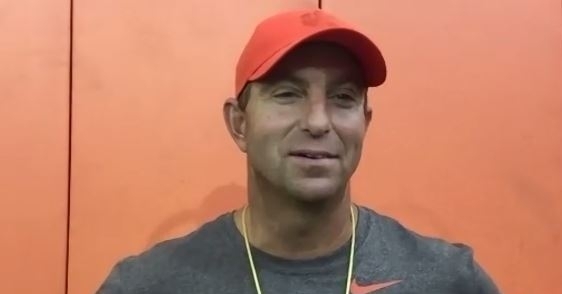 Clemson held a final prep practice Thursday ahead of game week and the season opener next week, with the full gameday test that is the Beanie Bowl held Friday.

Head coach Dabo Swinney met with the media Thursday after practice and we have an edited recap of the quick news and notes from his interview session.

*The Tigers finished their last prep practice before they get into game week. He was planning on seeing all of us in Atlanta right about now, but he has to see us digitally next week. Right now all about mental prep and extra details. Worked out in shells today and tomorrow will be the mock game (Beanie Bowl). A lot of players have never been a part of gameday and they need to know what to do pregame and postgame, etc. The team will have meetings and a jog-through Saturday and a day off Sunday.

*Never had this amount of practice time before – they have had meetings since February and have been meeting non-stop since then. Team went virtual and met all of April-July, got back in person in July, and then were able to get out on the field and do walk-throughs and start camp, and then season was delayed. Camp was set up to play tonight (the originally-scheduled date for Clemson-Georgia Tech), so it’s allowed for most time to get ready but the team has needed it. He wishes fans could be there, but said it will be the most-watched season in the history of college football and it’s a great opportunity. Can be an advantage or disadvantage.

*On the ACC, the league has a lot of players that no one has ever seen. He has a sense the league will be very strong this year. Thinks Miami is talented, FSU has talent, likes what Louisville is doing and NC State has been consistent. He thinks Georgia Tech will be better. UNC had a great season last year and will be better. Wake has consistency. You don’t want to play Duke. From top to bottom with Notre Dame, the league will be really good. How good? No way to answer until the games start.

*Team will keep it as normal as they can in the lead-up to Wake Forest on Sept. 12. Will travel on Friday. Will have more buses and more space, protocols at hotels, etc. A lot of guys will be in single rooms. They will try to keep it as normal as possible. Will still have black-eyed peas on game day. Will go to Anderson to stay before home games like always.

*On Clemson players not opting out, Swinney said he isn’t worried about it. Told the guys back in June they didn’t have to play. They have not had any issues like that and the guys are excited to be together. They love each other and everybody is trying to get it going next week.

*DE Justin Foster has been at practice every day. He has been limited but hopefully is making good progress and be with the team soon.

*Tight end Luke Price is out for the year. He has a torn ACL and will miss the season.

*Loves the cornerbacks group. Said it will be an exciting group to watch.

*Info on positive tests/quarantines that is shared between teams is all coordinated by the medical groups. Whole process in place from the medical advisory group. Clemson is still in a good spot COVID-wise, they have kept things mitigated really well. He says he knows there are a lot of people on campus and he is proud of how the guys have handled not being in contact with the other students.

*Swinney wouldn’t be surprised if they test every day in the near future due to the advent of improved testing processes. Says the team has fought for their season and he has tried to fight with them. Great leadership on this team, and they do care about each other.

*Freshman running backs Kobe Pace and Demarkcus Bowman have continued to impress. They have both hit a little bit of a wall but they are bringing them along.

*Says Frank Ladson and Joseph Ngata are “twin towers” out at wide receiver, and freshman Ajou Ajou continues to impress. Has no doubt that if they stay healthy, they will have big-time years.

*There will be a new way of handling injuries and/or COVID this season – the team will merely release “available” and “unavailable” during game week.