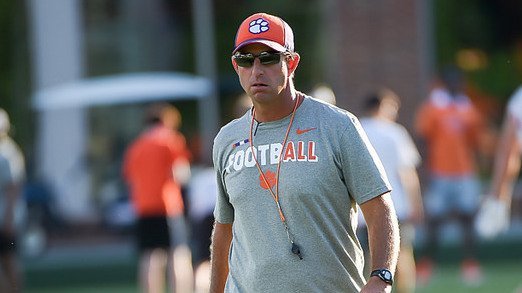 Swinney says he has something to prove every day

CLEMSON - Dabo Swinney’s football team entered Friday’s football ranked as the No. 2 team in the nation, and many across the country are picking the Tigers to once again appear in the College Football Playoff. Does it worry Swinney that his players are listening to the hype? Not in the least.

Not when you have an interim coach fighting for his career.

Swinney isn’t an interim coach. He’s one of the highest-paid coaches in the country, his teams have appeared in the College Football Playoff three straight years and he’s won a National Championship. But Swinney doesn’t let the accolades and the awards drive him or his team – in his mind he’s still an interim coach, and he makes sure his team has that same hunger.

“I come to work every day and I have something to prove. To me, I am still an interim coach that has to prove I can lead this program every day,” Swinney said Friday. “And Christian Wilkins has to show up and prove that he is still the best 3-technique. And Clelin (Ferrell) has to show up with that mindset from three years ago that is trying to prove he can be a great player at this level. That is something you have to have woven into the culture and you reinforce that when you get those opportunities. The preseason stuff is great, but that is based on past performance. That is just based on the past. We have to be great right here at this moment and be locked in on what we have to do with this team. Every year you have to prove them wrong or right and we have to go prove it.”

“That is every day. That is not something you walk in on day one and say, 'Hey, you have to go prove it. You have to go earn it.' It's just really every day as far as how we talk to our guys and the training and the strength and conditioning and how we talk to our guys in the off-season,” Swinney said. “Our individual meetings and group meetings. It's part of the culture of our program to handle success and adversity. We start over every year. That is just what we do, and we have to do it all over again. You don't carry over last year's big plays and you don't carry over last year's mistakes.

“It's a new challenge and we are on a new journey and the journey doesn't start today. If you just now think you are going to put the work in then you are behind. This team has been grinding since January. This is just the next phase of our journey. We constantly start over and reinforce that. Every coach and every player has something to prove. That is how we approach it.”

Swinney said he loves the way his team has worked since January.

“I love our team. I love the spirit that they have to come camp with. They are focused and they are serious,” he said. “I know the staff is ready to go. There has been a lot of administrative stuff to make sure we get the airplane off the ground safely, and today we get it in the air with this first practice. I am anxious and ready to go.”

The last time the Tigers were ranked second in the preseason poll, Clemson wound up winning the National Championship. He was asked if there were any similarities between the two teams, and he said that remains to be seen.

“We are going to find out. We have some similarities to that team,” Swinney said. “We probably have a little more depth than that team at certain critical positions. But that is all to be determined. That team was resilient and committed and did something that hadn't been done here in a long, long, long time. So it's hard to compare that team to this team. If this team can go on and have a great year and unbelievable success like that team did, then maybe we have something to talk about. But right now, we have to go put the work in and we have to put 121 days of commitment together in a row. We have all the ingredients. Now we have to put it together.”