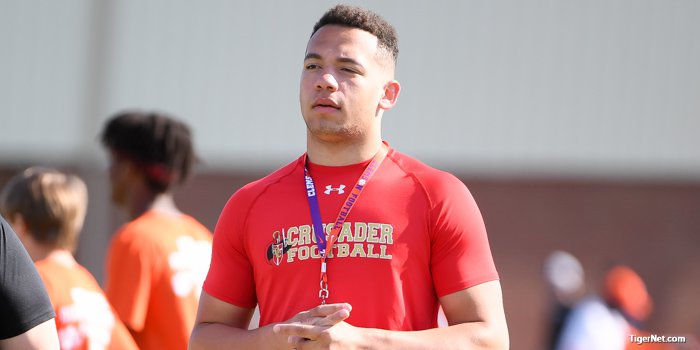 Alfano worked out with the Clemson coaches

CLEMSON – The first week of Dabo Swinney’s high school camp is over, and the end of camp certainly packed a punch.

It looked, to me, like there were nearly 900 kids in attendance for the final morning session, with the regular football practice fields and Jervey Meadows packed with prospects. Unseasonably cool weather and sunny skies greeted campers and parents alike, and I overheard one statement that grabbed my attention as I walked into the indoor facility.

“Yeah, my kid isn’t very good either. He just wanted a cool picture with Dabo and maybe Hunter Renfrow,” I heard one parent tell another.

Hey, whatever works for you.

Now, on to the sights and sounds:

*The first station I stopped at was linebackers. I always enjoy sitting back and watching Brent Venables work, and today was no exception. There is a reason guys love playing for Venables – yes he’s intense and focused, but he also knows how to motivate players. “Good job. Great footwork. Nice work, there. You like to work, don’t you? Nice! So much better the second time.”

One of the linebackers he was coaching was his Clemson commit Jake Venables. This week is the first time I’ve gotten to watch Jake since he transformed his body. I watched him during tackling drills and he’s a load. I wondered if the added muscle would affect his speed, quickness and agility. Those worries were unfounded – the work he’s been putting in at Flight School have worked wonders.

It’s also interesting to note that Venables began the week by working out with the defensive linemen, spending time at end. I am not sure that is where we will ever see him play, but it’s obvious he wants to learn and absorb everything he can.

Alfano worked out with the Clemson coaches "

*I walked over to the defensive linemen group, and noticed that Thomaston (GA) Upson Lee 2019 four-star defensive lineman Travon Walker was talking to line coach Todd Bates, and then recruiting operations coordinator Tyler Clements after spending time with Swinney.

Walker was there with his parents. Clemson, Georgia, Alabama, Florida St., Michigan, and LSU have offered, among others.

*Another big-time defensive lineman on hand was Oradell (NJ) Bergen Catholic 2019 four-star defensive lineman Antonio Alfano. Alfano started the workouts late – he had an issue with a shoe that had to be taken care of (thanks to Thad Turnipseed) but showed impressive size (6-4, 264) and quickness during the drills I watched. He has offers from Ohio State, Florida State and Penn State among others.

*Watching the proceedings with the defensive linemen was Apopka (FL) Wekiva 2019 defensive tackle Tyler Davis. Davis picked up an offer from Florida St. Wednesday, but he also hurt his hamstring and didn’t work out for Bates.

*Other prospects we saw and will have more on later are Apopka (FL) four-star guard William Barnes and three-star tackle teammate Ed Montilus.

*I’ll close with this – I mentioned earlier in the week that this camp has, in the past, played a huge part in offers and commitments for that year’s recruiting cycle. The Tigers picked up one commitment during the first week – from 2018 kicker B.T. Potter – but most of the attention this time around was on 2019 and 2020 kids.