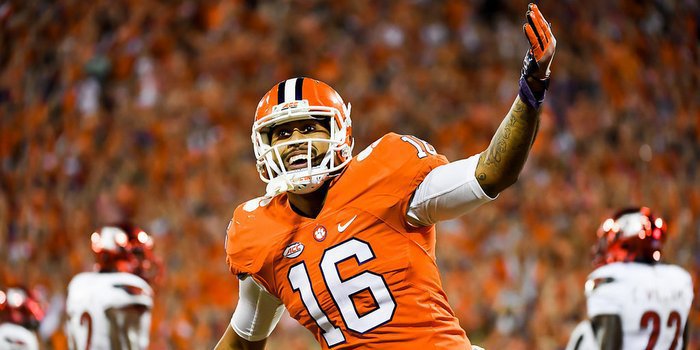 Jordan Leggett's late touchdown proved to be the winning score

CLEMSON – Tony Elliott sat in the press box Saturday night, engrossed in his playcalling duties, and didn’t get a chance too fully enjoy the electric atmosphere inside Death Valley during Clemson’s 42-36 win over Louisville.

But he did take the time to enjoy it pregame.

“I made a point in pregame when I huddled the backs up and before we said our prayer and before we headed into the locker room to tell them to just take and enjoy this and enjoy every minute of it because this is special,” Elliott said this week. “Obviously, every game is special but an atmosphere like it was in a big game with national implications, you don't get to play in those kinds of games every week, so I really, really enjoyed it. But, once I get up in the box, I'm removed. I like that part of it because it allows me to be able to think and stay calm and stay collected. I'm not down on the sideline in the ruckus to get distracted. I didn't get to enjoy the atmosphere up in the box, but I have a job to do on Saturdays and I'm not concerned with feeling the atmosphere. I like it in pregame but then I like to get up there and kind of get in my element so I can think.”

Elliott said the fans made a difference, but the Tigers will have to get back to work if they want to beat Boston College this week.

Jordan Leggett's late touchdown proved to be the winning score"

“Obviously very excited about the win and very happy for our program. Gotta give a big shout out to the fans. They were just as important as anyone on that field and really showed up and energized our guys the whole game,” he said. “There was a lot of mistakes too that could have cost us the game so that is going to be the biggest focus when we come back to practice today and start working on our plan for Boston College. Now you see what we are capable of, but there are some areas we need to improve. There are things in every aspect from the run game to the passing game to the timing and pass protection. It’s a big shot of confidence, but it is also a humbling experience because we did make some mistakes that could have cost us the game.”

Clemson’s second year co-offensive coordinator said the Tigers were ready to get back to work Sunday as they prepare to take on Boston College Friday night.

“It goes back to what the foundation of our program is and that is the most important game that you play on the schedule is the one you are playing,” he said. “Yes, we celebrate that win in the locker room, but it was a quick turnaround and we were right back on the practice field. I really liked our demeanor; they were focused on getting back to work because I think for us offensively we feel like we have the opportunity to be one of the best offenses in the country. We got off to an up and down start the first couple games, but hopefully our rhythm is starting to kick in on the run game and the pass game. They know that for Boston College you can’t look at their record and you can’t look at anything other than they’re going to be very good on defense and we had to throw the ball a lot to beat them last year and obviously we want to get back to doing what we do balanced running the ball and throwing the ball so they are embracing the challenge of playing another top ranked defense in Boston College.”

His thoughts on the offensive line

“It was consistent with what we saw at Auburn and the Georgia Tech game. The front side double-teams on a lot of the inside zones were there and I thought what you saw out of Wayne was him taking the base hit. There were some instances early on when he was trying to hit the homerun but then he got back to being the Wayne Gallman, “Wayne Train”, taking the dirty yards. You saw him take those 3 or 4 yard gains and the next thing you know is he is patient and chasing that center and then he pops one for about 25 for a touchdown. Communication was good, but I thought our guys really controlled the line of scrimmage. It finally came together where Wayne was getting up front and trusting his eyes and taking the base hits, then some of the homeruns came.”

Getting 200 yards on the ground

“I don’t think it is much about the number when it is more about the efficiency. I think anytime you run it sets up the play action and you can stay balanced and stay ahead of the chains. Obviously we were not great on 3rd and long but we only had 3 situations where it was 3rd and long. Running the ball gives you a lot of options psychologically and our guys believe in that number of 200 yards plus. It was good for them to accomplish that vs. a top ranked defense at home in a primetime game.”

“Ball security is something we stress all the time and we are not going to panic, but we are also going to continue to do our drill work. My guys are used to carrying it all the time in traffic in contact. The couple of fumbles we saw came from Deshaun having a great run but he was in traffic and it is hard to put him in those type of situations in practice to where he is getting hit to falling with the ball. Leggett was a function from a guy that you don’t see. We talk about that all the time with ball security is that most of the time it is the guy you don’t see. He is focused on the safety and the other guy hits him. The interception: one throw was inside, the other was a tip ball and then Deon was kind of stumbling on the tip of his route and let the DB get over the top of him and Deshaun threw the ball where it was supposed to be. These are things here and there that we need to clean up be we are not going to stress.”

“We have never felt like he has played bad. We are really proud of his decision making in this game. There are a lot of times when people looking from the outside don’t understand the concept and situations of the game. He did a really good job from a mental standpoint of controlling the game and making the right decisions. He has that mental toughness and prepares like a coach.”

Will the win help the confidence of the team?

“It was a big game. That is why young men come to Clemson is to have the opportunity to play in big games like that and to be able to win and perform. To show everyone what the heart of this team is validates to them. These guys go out and work every single day and our mentality is that you work like it’s a Monday when it’s Monday and so on but it was great to see the results. It gives us confidence on how we approach each game because now it is a one game season and every game on the schedule is the most important game.”

“Those guys are hard-nosed, they are tough, fundamentally sound. They have a new defensive coordinator so there are some new schemes. That guy went on to Michigan and you can see the success they are having. They are very stout inside and they play you bump and run on the perimeter. They are going to challenge us. We got a good yardage output against them last year but we did not run the ball the way we wanted to. Anytime we can push those rushing numbers up it helps us.”

Is he alert for a letdown?

What he learned in the win over Louisville

“I think this is a special football team and we a bunch of special young men. They had a decision to make and I challenged them during the game and they were challenged at Chapel Service before the game that there is going to be a decision that you were going to have to make at some point in this game whether or not you were going to accept defeat. If you accept defeat, then you will lose but if you do not accept defeat and continue to fight then you will come out with a win. We saw that these guys have the heart of a champion and they validate it every day by the way that they work.”

“I don’t really know how I feel about it I’ll let you know once I get there. We get the same amount of time to prepare with the fact that Sunday is our Monday and so on. We are going to have a good hard practice. We are trying to balance working hard as he possibly can but also getting our rest because tired decisions do not make for the best decisions.”