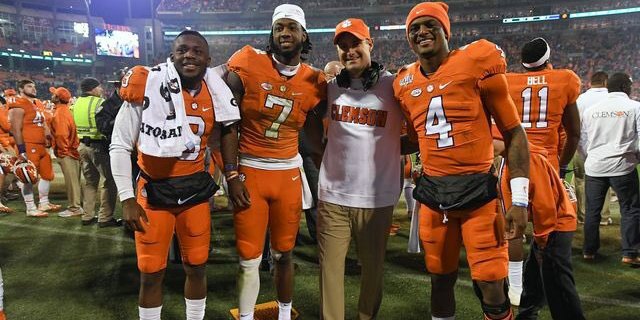 Scott takes a pic with some special juniors Saturday night

CLEMSON - Saying goodbye is hard to do.

That thought was running through co-offensive coordinator Jeff Scott’s mind when the seniors (like Jordan Leggett and Jay Guillermo) and juniors Deshaun Watson, Wayne Gallman, Artavis Scott and Mike Williams trotted out onto the field during the fourth quarter of the Tigers’ 56-7 roasting of South Carolina for one final curtain call.

Head coach Dabo Swinney called a timeout and sent the players back out onto the field, not to run a play but simply to bask in the adoration of a nighttime crowd in Death Valley a final time. The players huddled, waved their arms at the fans and thanked the fans for the love.

It was a scene Scott won’t soon forget. But it’s also something he’s seen before.

Scott made sure to get a photo with the juniors on the sideline.

“I've already taken that picture that I got on the sidelines with Deshaun, Mike and Artavis and sending that to some of the 2017-18 guys saying, 'I hope in three or four years, this is us on the sideline and you guys have had a great career here and have an opportunity to go do big things at the next level,’” Scott said.

“That's the fun with college football is you get these guys just for a few years and then you have to find a way to replace them. But, what this group has done has been incredible. Obviously, the group before them kind of took us to the next level in becoming a very relevant team on a national level. This group right here has taken it up even a higher notch.”

The Tigers have unbelievable talent waiting in the wings – quarterback Zerrick Cooper redshirted this season, Tavien Feaster gained experience this season, Deon Cain and Ray-Ray McCloud and Hunter Renfrow, Trevion Thompson, Cornell Powell, TJ. Chase and Diondre Overton will all be back next season. High-profile recruits like Chase Brice, Hunter Johnson, Tee Higgins, Amari Rodgers and Cordarrian Richardson will be on campus next spring.

The future is indeed bright, but Scott also knows this group – the one that said their emotional farewells Saturday night – will always hold a special place in his heart.

“I think we'll look back one day and say this is one of the best groups to come through Clemson,” he said. “It's special whether you are a coach or a player. I think this day in age there are a lot of talented teams out there and to be able to do that, especially at your alma mater, means a lot. These guys, especially this group going out, have accomplished a lot of things and that would be another thing to be able to add to their resume about their experience here at Clemson. It's something our guys are excited about and looking forward to be able to do that.”

A special night in Death Valley we will never forget... ???????? pic.twitter.com/yLRkEierju