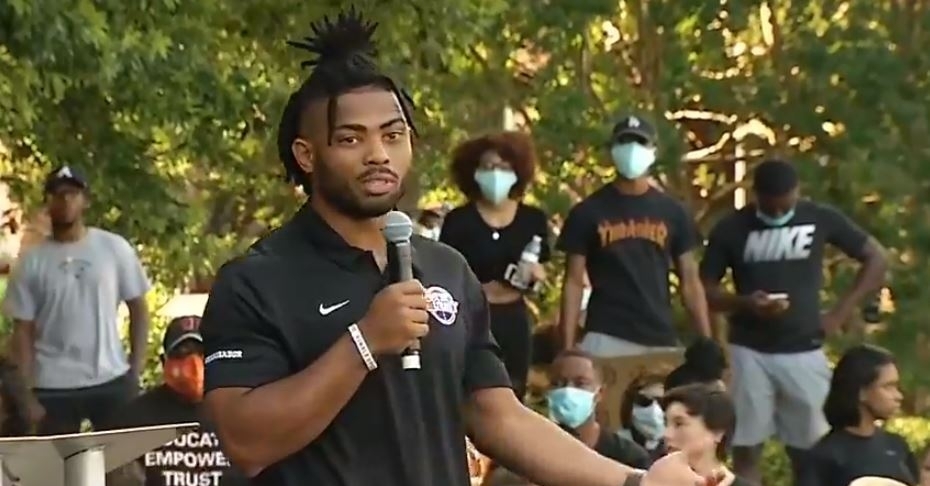 CLEMSON – Saturday evening in Clemson was one of those picture-perfect days, and as the bells in what is Tillman Hall and will be, once again, Old Main, began to chime -- a sea of faces looked toward a stage on Bowman Field and listened to the words of Tigers running back Darien Rencher.

Clemson will be a light for the world.

A peaceful demonstration and march against systemic racism was held Saturday in Clemson and it was led by many members of the football team, including Rencher, wide receiver Cornell Powell, linebacker Mike Jones, and quarterback Trevor Lawrence.

The demonstration started with remarks by the four players and a short video was shown, followed by over eight minutes of silence in an homage to George Floyd, the man killed by Minneapolis, Minnesota police a few weeks ago. A march around campus and down College Avenue was followed by remarks from head coach Dabo Swinney, Lawrence, and Rencher, along with the song Amazing Grace.

Rencher didn’t hold back in his remarks.

“I believe that God did this (the peaceful demonstration). I’m looking around and there’s no way four dudes who are broke and have no money trying to figure it out could have did this,” Rencher said to an estimated crowd of around 3,000. “But seriously, God did this. God’s doing it. Oftentimes people talk about revival and they think it’s about a church building. But I believe it’s this -- outside of some walls and outside of a steeple or whatever. This is it. And with that, oftentimes we think we can do it without God. But these moments humble us. They really do. They bring us together. They allow us to look up. They allow us to look within. We need all three. We need to be together. We need to look within as we leave here.”

Rencher then said the demonstration was merely a first step.

“Shame on Clemson football, shame on Clemson University -- shame on everybody who walked up here if we leave here and don’t take another step. Shame on us...The biggest goal is for this to be to be a step in the right direction and for it to be a trickle(-down) effect for more steps,” he said. “Hopefully after today we see a pivot in our lives, our university and our state. The nation is watching Clemson. They always have been. This little town has always been a light for the world and it won’t stop now. People come here from all across the country and the world and we send them out. Hopefully when we send them out to be anything better than where they are from.”

As the bells chimed behind the crowd, Swinney delivered his remarks.

“I’m embarrassed to say that there are things on this campus I didn’t really understand,” Swinney said. “I knew the basics but not the details. But I’ve learned and I’ve listened.”

“Black lives significantly matter and equally matter and for far too long that has not been the case for the black community,” Swinney said. “Now is the time to push for equal justice and no longer tolerate police brutality or racism of any kind in this country.

"Now is the time to push for equal justice and no longer tolerate police brutality or racism of any kind in this country."

(More from Swinney and also Lawrence and Rencher)