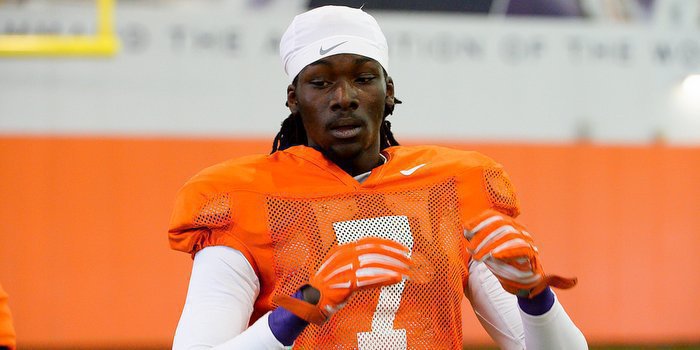 Coming to Clemson as a highly-recruited player out of high school and having to sit out during the Tigers’ run to the National Championship can be difficult for any player, but for three of Clemson’s redshirts, the year was well spent.

Clemson head coach Dabo Swinney has a rule that players aren’t allowed to talk to the media until after they’ve played in a game, but with the Tigers being in the College Football Playoff, TigerNet had a chance to catch up with several of the players who redshirted in 2016.

Argyle (TX) tight end J.C. Chalk, Bamberg (SC) defensive end Lasamuel Davis and Plant City (FL) wide receiver T.J. Chase all made the most out of their redshirt season and said they were looking forward to competing for playing time during spring practice.

Coming to Clemson, it was almost certain that Chalk would redshirt in 2016 with five scholarship tight ends ahead of him.

“It's been good. It's been fun to be able to redshirt just because I've been able to learn a lot from the coaches and get a lot bigger in the weight room,” Chalk told TigerNet. “Overall, I've been satisfied with it. I pretty much knew coming in that I was going to redshirt, but it's been a good season overall.”

Chalk said he spent the season trying to improve the intricacies of his game and adjust to college football.

Last year afforded Chalk the opportunity to learn behind All-ACC tight end Jordan Leggett, and he said that the lessons learned from Leggett have better prepared him to compete for playing time with Garrett Williams, Milan Richard and Cannon Smith.

“Jordan, for sure, because he's able to show me lots of different stuff here and there that he's learned throughout the years,” Chalk said. “Being able to come here for a year and having a great tight end like him to lead by example has been a good time.”

Davis was raw when he arrived at Clemson, but with all of the tools to become an elite pass rusher, the only thing standing in his way is adding the size he needs to compete day in and day out – something he’s worked hard on since arriving on campus.

“It's been good. I think I've improved a lot in terms of getting stronger and gaining weight. I feel like it is good for me that I did get to redshirt,” Davis told Tigernet. “I've put on 20 pounds, so I feel a little heavier, but that's part of the process. I feel good about it.”

While Davis has been focused on adding weight and muscle, he’s also had to be cognizant about not trying to lose his speed and quickness.

“It's kind of good, and then it's kind of bad, but I try to balance it out and make sure that I'm doing a lot of drills to gain weight but also keep my speed and quickness,” he said.

Davis spends a lot of time in the weight room, but he also spent time trying to improve every part of his game.

“I would describe myself as a pass rusher, but I want to get better at my all-around game and become a better run-stopper, too,” he said. “Guys like Christian Wilkins and Clelin Ferrell are good role models for me, and they tell me what I need to work on and what I need to get better at, so I feel like they're good guys.”

Chase didn’t arrive on campus until August, missing all of Clemson’s summer workouts, so the fall was imperative for him to improve his technique.

“It's been a great process. I came in at 160, and it's helped me out a lot because now I'm at 186 pounds,” Chase told TigerNet. “I've improved my footwork, high-pointing the football and getting in and out of breaks. I'm looking forward to spring football now.”

Wide receivers coach and co-offensive coordinator Jeff Scott lost Mike Williams and Artavis Scott to the NFL, but Chase said that learning behind those guys means that the next group is ready to step in and continue the legacy of Wide Receiver U.

“No doubt. Day in and day out, we're learning from the wide receivers that are ahead of us, and we're going to take their place fill their shoes,” he said. “It's been a tremendous experience. There's no wide receiver corps like them so to come to Clemson and to be able to learn from them has been a great experience.”