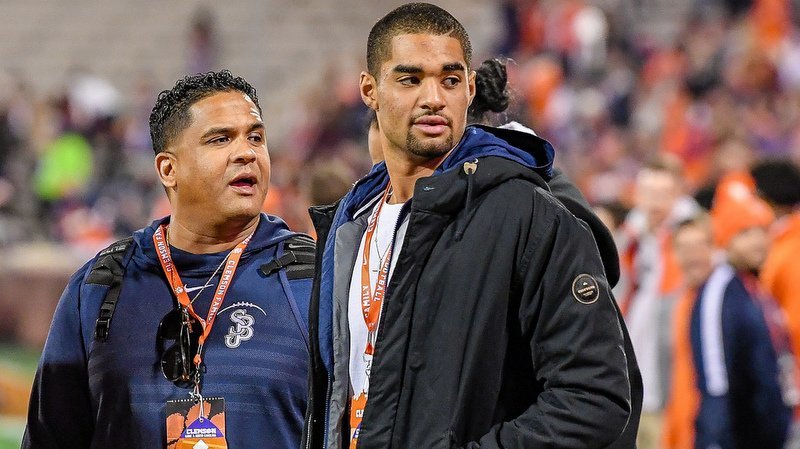 Some big-time visitors from California will head to Clemson next week for head coach Dabo Swinney’s high school camp.

Bullock is also bringing two prospects from another one of California’s big-time programs in Mater Dei. 2021 outside linebacker Raejon Davis (19 offers) and 2021 defensive back Jaylin Davies (16 offers). Davies’ offer list has exploded as of late – he picked up an offer from Alabama last week, along with scholarship opportunities from Ohio State and Southern Cal, and UCLA.

*Another big-time prospect from California is headed to Clemson. Five-star linebacker Justin Flowe of Upland (CA) will visit Clemson on July 26th (unofficial as of now). That should be the date for the All In Cookout.

The recruiting process is just unfolding for Pennington who also has offers from UofSC, Georgia, Arkansas, Ole Miss, and Mississippi State. But the Clemson offer really excited him.

*Another prospect that went to Clemson looking for an offer was 2021 corner Jerrold Pough (6-0 170) of Hollywood (FL). Clemson has not yet offered. South Carolina has along with Maryland, Tennessee, Penn State, Michigan, NC State, Miami, LSU, Kentucky, Louisville, Oregon, and others.

Pough said he had a great camp with the Tigers and would love to be able to add them to his offer list.

"Oh, I love it," he said. "The coaches love me. They are telling me if I come in around December I can get on the field immediately. They said to bear with them (about an offer). They showed me around campus. It's a great environment. I love the facilities."

Pough said Clemson cornerbacks coach Mike Reed has been talking with him and he also talked with defensive coordinator Brent Venables Wednesday.

*On the basketball front, 2021 big man Gabe Wiznitzer (6-11) now has a chance to come back home for his college basketball. He grew up in Walhalla before going off to attend the Christ School in Arden, NC. This season he will play for Hargrave Prep, VA.

Having grown up so close to Clemson, he and the staff are very familiar with one another. They took another step forward in their relationship this week when Tigers’ coach Brad Brownell offered while Wiznitzer was in for an unofficial visit.

”I was really excited to get the offer,” Wiznitzer said. “I love that it’s super close to where I live and I really like the coaches I like how they utilize their bigs and will definitely continue to build my relationship with the coaches.”

Wiznitzer is building an impressive offer sheet. Along with Clemson, he has LSU, Nebraska, Penn State, TCU, Marist, St. John’s and Iona. Clemson has a major place at the table with him right now.

“It’s definitely one of my favorite ones,” he said. I really don’t have them ranked, but I’d say it’s in my top three from the offers I have now.”

Wiznitzer said one reason Clemson resonates with him is the style of basketball Brownell employs, especially involving the bigs.

Wiznitzer also has visited Georgia Tech and he wants to visit Nebraska, Penn State and some of his other offers. He’d also like to check out Michigan State. He has no timetable for a decision.