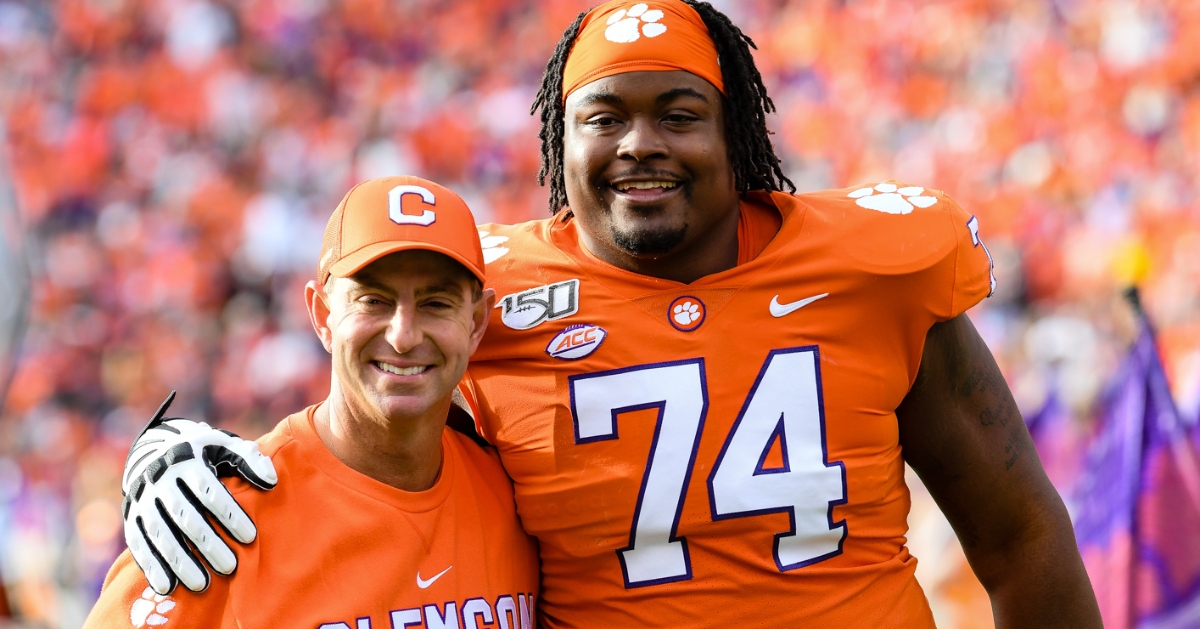 Simpson poses with Swinney before the game against Wake Forest.

The Las Vegas Raiders wanted John Simpson enough to make a trade on the third day of the NFL Draft in order to move up to select the Clemson right guard.

The Raiders agreed to a trade with the Lions to move up and select Simpson. Simpson is projected to receive a four-year, $3,431,780 rookie contract that includes a $796,780 signing bonus. The Raiders moved up 12 spots in the trade to the No. 109 spot, while the Lions received two later picks.

"Yeah, I went to bed last night with a plan to trade up - wasn't sure with who. We started calling teams last night and continued early this morning,” Mayock said. “We ended up getting the third pick in this round with Detroit and we really wanted to get that Clemson guard. He was a guy that we had on our board for yesterday, depending on how the board fell. We would have taken him in the third round. We kind of felt like he was going to go quickly. We were able to use our fifth-round pick to move up and get him.

“We really wanted to get John Simpson. He was actually on our board for yesterday and depending on how the board went, we would have taken him in the third round. But we felt like he was going to go quickly so we were able to use that fifth-round pick to move up and get him. He’s a competitive, tough and smart kid and we are thrilled with the way day three of the draft went.”

“All of those guys are like brothers to me and it’s a bond that you can't break,” Simpson said. “I never really had an idea of where I was going. I talked to the GM about a week before the draft, and it kind of made me feel comfortable that I was going to get drafted. Just to know that I am going to the Raiders is huge.”

Simpson said he didn’t know what the Raiders plans are, but he just wants the chance to compete for a spot.

“For me it comes down to preparation and your attention to detail. At the next level, everyone is just as good as you, if not better, so you just have to be prepare,” he said. “Right now I’m just going to go in there and compete. I don’t really know what role I will serve but whatever it is, I’m going to do it and do it at my best.”

Simpson played in big game after big game in his Clemson career, but says what he does from here on out will tell the tale of whether he makes it or not.

“I think that plays a part in it. I think where it comes from the most is just preparation and attention to detail,” Simpson said. “At the next level, everybody is just as good as you or even better, so you have to prepare.”

“John Simpson was a captain and a graduate and is as good of an offensive lineman as we’ve had come through Clemson—going on 18 years, my 18th season—as good an offensive lineman as I’ve seen here,” Swinney said. “He’s ready-made. He’s what everybody’s looking for at the next level. He’s got all the measurables that everybody’s looking for as far as the strength, size, athleticism, flexibility and power. He’s been a great player for us. He’s played against the best of the best. I’m excited about his continued development at the next level.”