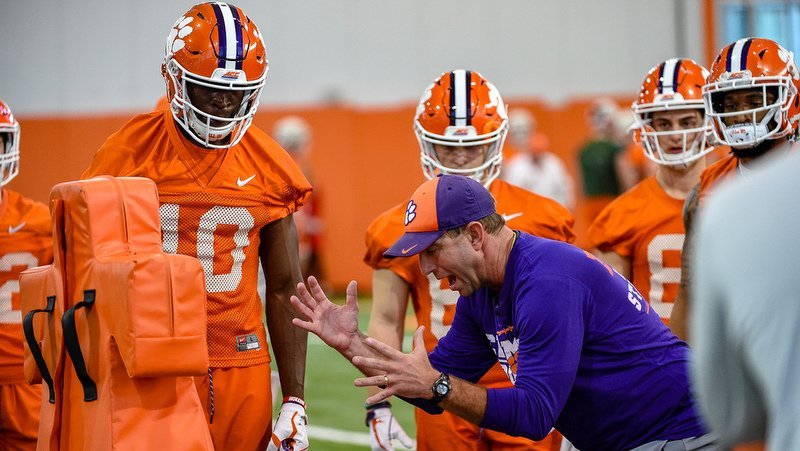 CLEMSON - Tony Elliott met with the media for the second time this spring Monday, and he had plenty of praise for the Tigers' freshman class.

Elliott, Clemson's running backs coach and co-offensive coordinator, was asked which members of the freshman class have caught his eye and he started with the two receivers, Joseph Ngata and Frank Ladson.

"The two young receivers. Golly, they are special talents," Elliott said with a laugh. "Special talents. But more importantly, they are unbelievable young men. They are the kinds of guys that you love to coach because they just come in and they understand how talented they are. They've had some success, and they've kind of hit that wall where they understand, 'Hey, I just can't get by on my talent because I've snuck up on people.' Now they have to learn their position, and they just compete.

"They don't say anything. They are about the right things. They do the little things right. They run after the catch like it's a game. They run hard on and off the field and they are very, very coachable. Those two guys are going to be special in the future. They have to get into the summer and build their bodies for the long haul and take advantage of the skills and drills that we do in the summer and really internalize the system so that they are ready to go in fall camp. So the sky is the limit for those two."

Elliott then talked about the three young offensive linemen in camp - Hunter Rayburn, Will Putnam, and Kaleb Boateng.

"I thought Rayburn got off to a good start, and then once the installations started to pile up you could see that he was functioning, he was swimming, but he was doggy paddling. He was just trying to tread water. Especially at the center position, because you have to make so many declarations and identifications. That is tough on a freshman. You look at Putnam; he is just a bull in a china shop. He was all over the place.

"I love his physicality, but again, as the installation piled up and you're going up against a (Brent) Venables defense where they are never sitting still, and they are always moving around, and you have something new every single day, it started to wear on him. And then Kaleb has been doing a good job. He probably has the furthest to go of the three, but again, that is a hard position to transition to, especially on our practice field."

Elliott then said he was excited to see what quarterback Taisun Phommachanh can do Saturday.

"It's tough because of the standard that he is measured by is a little unrealistic," Elliott said. "You are talking about guys that have come in here in the spring of their freshman year in Deshaun Watson and Trevor Lawrence, and obviously he's a guy that came in with a good background but at the same time not the same preparation that Deshaun and Trevor had coming out of high school. I've been pleased with his command of the offense. It's the little things we always talk about.

"He sees the big picture better than I anticipated. Now the big thing is when the bullets start flying can you process all of that as quick as you need to process it, and that is where he is growing every single day. I am excited to see him in a situation where the coaches aren't on the field, and he's out there by himself, and he's responsible for commanding everything. I think he will rise to the occasion."

"Jaelyn Lay is coming every single day. When you look at him, you have so much expectation," Elliott said. "This guy is a freak-looking guy. But then he gets out there, and you realize he plays probably the most difficult position on our offense because they are the formation adjuster, they have to know all of the pass combinations, blocking schemes, protections and they've gotta know everything about our offense. They don't get a lot of help, because everything is at the signal and they aren't around the quarterback.

"I think early on that slowed him down a little bit, so you didn't get to see his athleticism, but over the last couple of days you've really seen him start to be more comfortable and he's playing faster, and he's catching the ball better. He is making plays down the field, and he knows where he's going in the run game. He needs to be in the weight room. I think as each day goes by he will be more and more confident and as we go along, you will see what he can do."