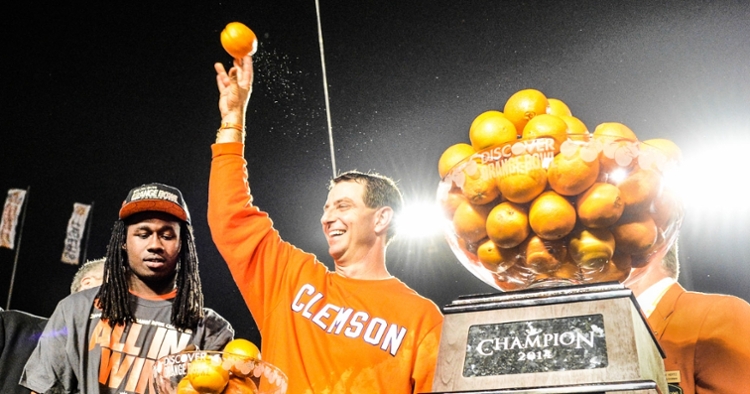 Swinney knew his Tigers were going to win the Discover Orange Bowl over Ohio State.

Dabo Swinney has proudly carried a Discover Card since 1989, and with good reason. Without Discover, Swinney might have never gone back to school at Alabama, earned a scholarship, or gone into coaching.

TigerNet has been running a selection of Swinney stories this week, and our latest installment centers on an early fall day in the summer of 1989. Swinney was set to enter his second year at the University of Alabama, and because he was a walk-on and not on scholarship with the Crimson Tide, he was responsible for his own tuition and rent.

He was behind on both.

“I went to Alabama in 1988 with a Pell Grant and with student loans, but I had no money and no one to help me,” Swinney said. “But I had the Pell Grant and student loans. So, I go to school in the fall of 1988. And my wife Kathleen was a year behind me, and she comes to Tuscaloosa in the fall of 1989. I am in training camp and I am in two-a-days, and at the time I had deferred tuition because I was trying to get my Pell Grant money and my tuition money. Back then, I used my dad's taxes because he literally had no income and that would get me the most money.

“It took me forever to get the tax returns from him, so I was late getting in my Pell Grant application and all of my stuff. And we go through two-a-days, and it's like two days before school starts, and back in those days you had to go over to the basketball coliseum and get in a line and you would stand there and have to meet with a person and they would apply for financial aid and you would get your schedule and all that stuff.”

Swinney made the trek over to the basketball arena to set up his schedule but ran into bad news instead.

“I had been through all of these two-a-days and I get over there and I'm in line to get my schedule, and I get up there to get my financial aid because that is what is paying for my schooling, between my student loan and my Pell Grant,” he said. “I get up there and the lady looks up at me and said she didn't see any financial aid. I told her that I had it last year, but as it turned out we had gotten it in late and it had been processed enough to where they could see it. I was already two months behind on my rent to my landlord. Mr. Cotton was a good guy and he knew I was getting my money on this day and I was going to come pay him. But the lady looks at me and says, 'I am sorry. The only thing that I can offer you is you have to pay at least half of your tuition by tomorrow or your tuition is canceled.’

“I didn't have half of my tuition even though tuition was only about $1100 per semester back in those days. So I needed about $550 or $600 right then. I didn't have that, it might as well have been $6 million. I went back to my apartment and I was tired from two weeks of two-a-days. Kath is in town and she is getting ready to enter school. I called my mom - she was working at a mall in Birmingham - and I told her what was going on. She cried and I cried, and finally, one thing I said was that the one thing we have control over in our lives is our attitude. I was growing in my faith - I had gotten saved when I was 16 and now I'm 19 - but I told my mom I would just come home and get a job and save some money and try and come back to school in January. I hung up the phone with her and prayed about it. This was my reality. I knew I wasn't going to be able to play that year.”

As it turned out, 1989 was the year Swinney earned a scholarship from receivers coach Woody McCorvey, so missing that season might have changed the path of his life and that of the Clemson football program.

However, Swinney was about to receive a miracle in the mail.

“I sit there for a few minutes and then I walk out to our mailbox and I got my mail. It was mostly junk mail, but there was one envelope that had Discover at the top of the envelope,” Swinney said. “I opened it up - remember this is 1989 - and it was a typed letter and at the bottom of the letter, there were two perforated checks at the bottom of the letter. And I open the letter and it says, hey congratulations, we have started a new program here at Discover called Discover Checks. So for those in good standing, please feel free to write one of these checks just like a normal check for up to your normal credit limit. I was reading it and I didn't know if it was some kind of a scam. But there was a number that you could call - 1-800-DISCOVER - and so I called and the lady answers the phone and she asked me for my information and I told her I had gotten the letter and told her I didn't understand because I didn't have a Discover card.

“She gets my name and she comes back and she said, it shows we issued you a credit card. So now I am panicking because maybe it was sent to a relative and they had used it and I was now in debt. But then she said that it was actually returned because they had the wrong address. I said, 'What? You mean I have a credit card?' And she said yes, that I was a part of the good student program. I said you are telling me I can write these checks for whatever I need them for? And she said yes, just like they were regular checks, but only up to your regular credit limit. And I asked about that and she said, 'One thousand dollars.' And that all happened in a span of about 15 minutes, from talking to my mom and I am in tears to finding that money.

“That was one of my moments early in life when I knew that God had his hand on me and was in control. I started screaming on the phone, and I wish I had a recording of it, I am sure Discover has it somewhere. And I went and wrote a check to the landlord for $480, and I wrote a check to Alabama for $500. I was a thousand dollars in debt but I was in school. And then fast forward, later on in life, I knew we were going to win the Orange Bowl. We got beat in 2011, but later on they got a new sponsor and it was called the Discover Orange Bowl. In 2013, I told guys we were going to the Orange Bowl and we were going to win it. I told the CEO of Discover this story and he loved it. And I have been a member since 1989. It says it on my card.”