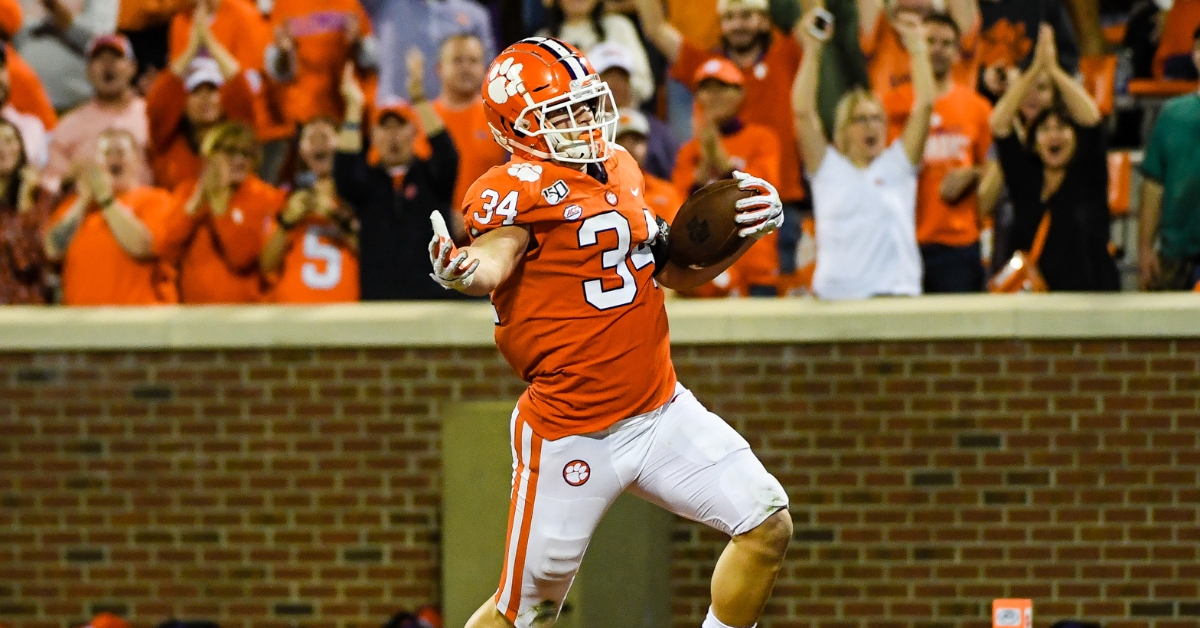 CLEMSON – Coming soon to a college campus near you, the recruiting pitch of Coach Stiff.

Clemson defensive end Logan Rudolph is fiery and intense on the field, but he’s a bit of a ham off the field. His quirky sense of humor led to the birth of Coach Stiff, an alter ego that sometimes speaks to the team after games and during Monday team meetings.

Rudolph has fun with the role.

“It just kind of came in the offseason,” Rudolph told the media Tuesday. “I was messing around and I decided to do a little coach impersonation - not necessarily what I experienced but what I've heard of others and myself just going through the recruiting process. Just having fun with it and messing around.

“You always have to have fun with it. I like to express my alter ego, so to speak. I just like to have a different personality. It's always having fun or posting videos and hanging out with the guys and having fun.”

Head coach Dabo Swinney approves of having another coach in the house.

“He's very dry but hilarious. Literally hilarious,” Swinney said of Rudolph. “He just has this very serious demeanor to him all the time. He's very much about his business but he's absolutely hysterical because he's creative. You probably remember his commitment video when he was out there chopping a tree in jorts. In fact, he made the screen yesterday. Every Monday we do a kind of fun video to kick off our Mondays, and he made the video yesterday.

“And he has an alter ego called Coach Stiff. The past few games we've been calling Coach Stiff up to address the team in postgame and that's been a lot of fun. The guys they get a kick out of Logan. He is a ball of intensity. You don't see that coming from him but he's got this whole other side where he is just so funny.”

Rudolph said Swinney embracing the fun is a testament to the culture built at Clemson.

“It just speaks to the atmosphere. We love to have fun around here,” Rudolph said. “I think Coach Swinney does for sure. It's great that we're allowed that opportunity. It's always a premium on having fun. The fun is in the winning and we've certainly done a lot of that lately.”

Stiff speaks to the team after games.

“After one game, Coach Swinney called me up and called me out so I had to deliver,” he said. “I was really nervous but I had a quick one liner and guys seemed to like it. After Boston College but there was another time before that.”

On Coach Stiff having a lot of the coaching clichés

“Hey buddy, big guy, there are some good ones out there. I'm always researching and doing qualitative research. Just throughout the recruiting process, I've gathered from different sources and kind of tried to research.”

On his fumble recovery for a TD Saturday

“It was just such a fun moment. It was a great opportunity to be at the right place at the right time and just celebrate that moment with my teammates. Just had a lot of fun doing it. It was special. My parents were there for that and it was great to see them after the game.”

On coming back after injury

“I'm by no means a specimen as far as my measurables. I'm an undersized d-end and I know that so I really do have to sell out on every play and give my all because I know that there are guys out there who may be bigger or faster or stronger than me and I just have to give my all on every play. That's what I try to do.”